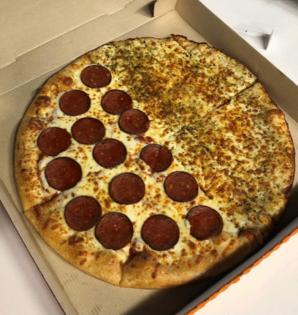 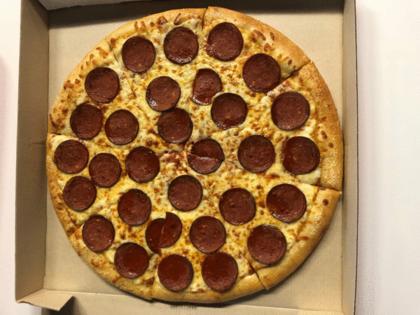 Little Caesars partnered with Greenleaf Foods Field Roast brand, maker of plant-based meat and cheese products, to launch its Planteroni pizza in five U.S. markets, including Detroit. The plant-based pepperoni will also be a topping option for custom pizzas via the chain's app or website.

At first glance, it looks like a regular pizza. But upon closer inspection, the plant-based pepperoni slices look bigger than regular pepperoni and it appears that there are more of them.

The texture was a little too soft, tasters said, and unlike regular pepperoni with its sometimes chewy texture. Tasters also missed the slightly crispy edges of pepperoni.

Though others didn't mind the texture.

Planteroni's initial taste was a bit of a shock for tasters who had been expecting a traditional pepperoni flavor. While different, the flavor grows on you as the seasoning starts to linger.

It's a fun addition for those looking for a non-meat option on pizza.

But keep in mind, pepperoni is the only plant-based item on the pizza.

The cheese, the chains blend of mozzarella and Muenster cheeses which is not plant-based, helps the pizza along as does the crust.

In select markets, stores will offer a regular size Planteroni Pizza for $8.49. It's also offered as Slices-N-Sticks options with half Planteroni pizza and half cheese and butter breadsticks for $8. The pizza also launched in Los Angeles; San Francisco; New York City; Miami, and Portland, Oregon.

"Planteroni delivers a plant-based version of the delicious flavor of America’s most popular pizza topping, and you need to taste it to believe it,” Jeff Klein, chief marketing officer at Little Caesars, said in a news release. "This product is really going to surprise and delight our customers.”

Field Roasts' plant-based pepperoni is made with pea protein and spices including fennel, cracked black pepper, garlic and paprika, according to a news release. Field Roast debuted the pepperoni earlier this year, and Little Caesars is the first national pizza chain to offer it in the United States.

At participating locations in the select markets, Planteroni Pizza will be available to for delivery using the Little Caesars app or pre-pay and its Pizza Portal pickup.

This gluten-free, vegan version of peanut noodles has a high protein content thanks to edamame and peanut butter. Spaghetti squash turns delicately sweet when roasted, which pairs wonderfully with the Thai-inspired peanut ...Read More

Kary Osmond will not file a recipe for the 9/20/21 Entree package.

While others sing the praises of kale, I am a big Swiss chard fan. I find it has a mild, sweeter flavor than other greens. And it’s versatile: I’ll add it to pasta, risotto and soup, and I’ll saute it or braise it ...Read More

It’s always fun to open up my grandma’s recipe box to find the perfect dish handwritten on an index card. And her classic applesauce cake jumped out at me as the ideal treat for fall. It’s made with all the warm ...Read More

Some appetizers seem to disappear more quickly than others. Take bacon-wrapped shrimp, for example: If it’s on the table, it’s almost guaranteed that it’ll be the first to go. They’re just irresistible. Play around...Read More