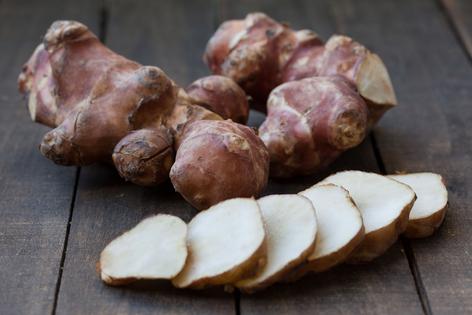 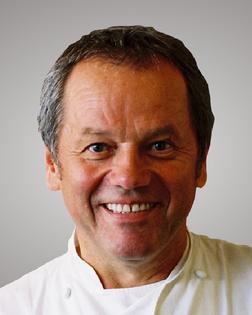 One of the happiest benefits of the farmers market revolution is the fact that food lovers get to discover products that not so long ago were unknown or unavailable. Seeing beautiful piles of produce in a market stall and talking with the people who grew them encourages cooks to try vegetables or fruits that they may once have been wary of tasting through unfamiliarity, much in the way that toddlers sometimes instinctively turn their heads away when introduced to new foods.

Two of my favorite ingredients whose profiles have risen in recent years -- thanks in part to farmers markets are sunchokes and fennel bulbs. I like to think of them as both literally and figuratively "underground" vegetables, because they grow beneath the soil and once were little known to the general public. What's especially interesting and pleasing to me is how well they complement each other, as you'll see when you make my recipe for sunchoke and fennel soup.

"Sunchoke" is the modern-day name now generally given to what once called the Jerusalem artichoke. The name has changed largely for accuracy, since the knobby little tuber (an underground stem, or rhizome, like a potato), which looks a bit like overgrown ginger, neither comes from Jerusalem nor is related to the artichoke, apart from a shared slightly nutty flavor.

In fact, the first part of the former name comes from the fact that it's part of the sunflower family, and the Italian word for that plant is girasole, literally meaning "turning toward the sun" as sunflowers tend to do; though it was mistranslated into English as a reference to the Holy Land! Sunchokes are highly versatile, delicious raw in thin slices or cooked in a wide variety of ways.

Fennel bulb, meanwhile, is related to the feathery, anise-scented herb called fennel. The bulb is wonderfully crisp and refreshingly flavorful, delicious raw in salads or cooked. Some people, however, may object to its hint of sweet licorice-like flavor.

But when you bring cooked sunchokes and bulb fennel together in a pureed soup, something marvelous happens. That licorice flavor recedes to become subtly herbaceous, while the sunchokes harmonize perfectly with their mildly nutty richness. (I also include a potato to lend the mixture just a touch more body, as well as a large shallot for its sweetly oniony aromatic note.) The result is an elegant, beautiful soup worthy of a special dinner party, especially if you take the optional extra step of deep-frying some thinly sliced sunchokes to add a delightfully crispy garnish like miniature potato chips.

So please visit your local farmers market soon and try these unheralded stars of the vegetable world. I hope you'll agree with me that they were meant for each other!

The secret to our cobbler is that we bake the berry filling before topping the cobbler with the biscuit dough. Then we bake it again to get our fluffy, flaky biscuits. This works so well because if the berry filling is hot...Read More

This recipe is designed for peak-of­the­season, perfectly ripe tomatoes and peaches from your garden or a local farm. It’s perfect for heirloom fruits — a term used to describe varieties that can’t withstand the ...Read More

Cheesecake is delicious, but baking a big traditional one can be tricky. You have to bake a large cheesecake inside another pan filled with water to make sure it bakes evenly — a fussy and delicate maneuver in the oven. ...Read More

Looking for a sweet bite in the morning? Adding raspberries to your muffin batter yields a tasty bite the whole family will enjoy. And while you’re snacking on these delicious muffins, you can teach the kids some fun ...Read More

A summer treat that’s fun for kids and adults alike, paletas are easy to make and simply delicious. And while fresh fruit tastes best, you can use 1 pound of frozen strawberries, thawed and drained on paper towels, in ...Read More