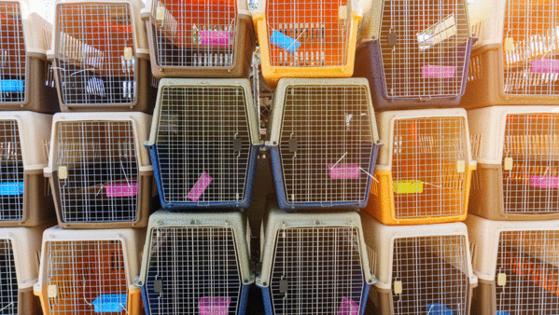 HARTFORD, Conn. -- Kittens were being born at a home in Winsted, Connecticut, even as the Winchester Police Department removed some 200 cats from the dwelling that was infested with fleas, the stench of urine so strong that it was overbearing, even in a Hazmat suit and mask.

There were dead cats in the freezer, sick and dying cats all around and it took two weeks to get the cats out of the walls.

Four people are charged with 106 counts of cruelty to animals each in the case that shocked the region. They are also charged with risk of injury to a minor as there were two children, 10 and 6, living in the house.

The first step was to remove the children and connect them with the Department of Children and Families, Winchester Police Chief William Fitzgerald said.

“The kids were filthy,” he said.

Building officials condemned the home, and mental health workers were brought to the scene.

The adult residents didn’t try to rectify the dysfunction before they were found out by police because they are likely animal hoarders, officials said.

The Diagnostic and Statistical Manual of Mental Disorders describes animal hoarding as a condition associated with hoarding disorder and defined by, “the accumulation of a large number of animals and a failure to provide minimal standards of nutrition, sanitation and veterinary care and to act on the deteriorating condition of the animals (eg, disease, starvation, death) and the environment (eg, severe overcrowding, extremely unsanitary conditions).”

In the past, it has been linked to obsessive-compulsive disorder. Experts said it’s not the number of animals that makes a person a hoarder, but rather when the numbers exceed the ability to provide proper care, including food, space, veterinary care and cleanliness.

In the Winsted case, experts said, the adults likely started out with good intentions — to feed and shelter strays — but without spaying and neutering the cats, they reproduced. Before long, the numbers became unmanageable, police theorized. Rather than putting an end to it or asking for help, they kept going — likely going to great lengths to cover it up.

(UPI) An indoor cat who escaped from his Ohio home was reunited with his owner after surviving 18 months in the wild.

As the Thanksgiving holiday approaches, we are all busy planning the day and what dishes we might make. Because you might not be able to give your dog full, undivided attention during the holiday, there are more ...Read More

Cat owners can’t get enough of two pet names — and they now rank as the most popular in the United States.

Luna is the No. 1 name for female cats while Oliver tops the list for male cats, according to results ...Read More

Cat owners can’t get enough of two pet names — and they now rank as the most popular in the United States.

Luna is the No. 1 name for female cats while Oliver tops the list for male cats, according to results ...Read More

(UPI) Passengers on a New York commuter train were temporarily delayed when employees ventured out onto the tracks to rescue a wayward kitten.

The Metropolitan Transportation Authority said the engineer on the 9:40 a.m. ...Read More