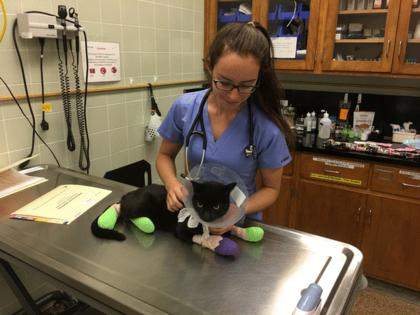 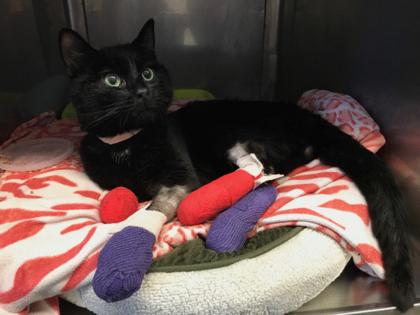 Dr. Ronald Li, a critical care veterinarian at UC Davis, treated 23 cats that were rescued from the devastating Tubbs fire that scorched Northern California for more than three weeks in October 2017. They had the kinds of traumatic injuries he expected to see: first- to third-degree burns, exposed skin and scar tissue.

But there was something else about these feline patients that caught Li's attention: life-threatening blood clots.

"In heart scans, we noticed clots forming within their hearts," he said. "But at that time, we didn't know why."

Blood clots normally develop in response to an injury such as a cut or wound to prevent runaway blood loss. Those weren't the kinds of problems the cats were dealing with.

So a year later, when the Camp fire ravaged 240 square miles east of Chico, Li collected blood samples from rescued cats that were brought to his clinic.

The researchers found that compared with healthy cats, the cats affected by the wildfire were more likely to have blood clots, which have the potential to be life-threatening. The rescued animals also had more blood clots than a group of cats with a relatively common type of heart disease that increases their risk of clots.

The findings, published this month in the journal Frontiers in Veterinary Medicine, mirror an earlier study by UC Davis researchers showing that cats that got close enough to wildfires to be burned or inhale dangerous amounts of smoke were more likely to develop cardiovascular problems, such as a thickening of the heart muscle that can lead to heart failure.

"The results are pretty compelling," said Bruce Kornreich, director of the Cornell Feline Health Center, who was not involved in the research. "There's a lot of conserved biology across different species. This is something that could provide information to benefit not only animals but people."

The new analysis was based on blood samples from 29 cats that were injured in the Camp fire and brought to UC Davis with burns, lung damage and heart issues. They were compared with 11 cats that were perfectly healthy and 21 that were in generally good health but had a type of heart disease called hypertrophic cardiomyopathy.

The researchers found that the cats exposed to the Camp fire had highly activated platelets, but the two other groups did not.

(UPI) A Wisconsin couple turned their collection of more than 13,000 cat figurines and feline-themed pieces of art into a "mewseum" to raise money for shelter cats.

(UPI) Firefighters in Tennessee came to the rescue of a curious puppy that got its head stuck through the middle of a disused truck tire.

LOS ANGELES — Pandemic-related shutdowns in 2020 gave many people who believed they didn't have time for pets the push they needed to adopt.

But with many offices haltingly bringing employees back and vacations in full ...Read More

Sleeping under the stars on a warm, breezy summer night is a feeling like no other – and it’s even better with your dog by your side. Bringing your pet camping with you is a fun way to bond, get exercise and enjoy ...Read More

According to the American Veterinary Medical Association, around 40,000 pets in the U.S. die in residential fires each year, mostly due to smoke inhalation, and 500,000 pets are affected overall. In some instances, pets ...Read More

So good, in fact, that’s he’s being hailed as a hero for leading search and rescue crews on a 200-yard trek after his owner was injured when he fell 70 feet while hiking near ...Read More