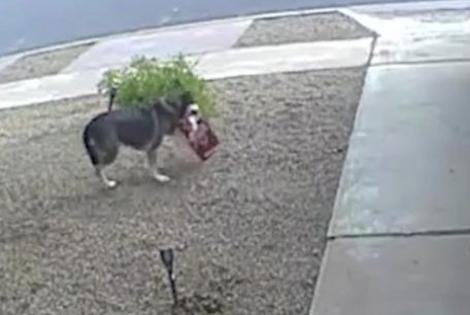 (UPI) A Texas resident shared security camera footage identifying the thief who stole a 10-pound package from their porch -- a neighborhood dog.

The post said the dog only took the Milk Bone box, leaving behind several other packages.

A commenter on the post, Bekah Elder, identified the canine in the video as her husky, named Kit-Kat. She wrote that Kit-Kat had escaped from her fenced-in yard about a 1/4 mile from Mills' home.

Elder said Kit-Kat was found later in the day, but she had no idea the dog had been getting up to mischief until seeing the video.

"She showed no signs of having eaten anything and happily ate her dinner that night. I had know idea of the thievery until I saw the video," Elder wrote.

Memorial Day is right around the corner, and the unofficial start of summer brings back outdoor barbecues. If you’re entertaining and want to have your pup around, there are some things worth noting before you start ...Read More

(UPI) A puppy who went missing from his New York home and was spotted dashing through two tunnels was rescued from a parking garage ledge at a Home Depot store in New Jersey.

It isn’t hard to empathize with that homeless Wisconsin woman who was undergoing chemotherapy and whose beloved dog, Baby Girl, had reportedly been turned away by an animal shelter when she tried to give her up. In a ...Read More

It’s finally warming up outside! With more opportunities to enjoy the weather and the summertime fast approaching, we are sure to spend time outdoor dining with our pups at pet-friendly restaurants.