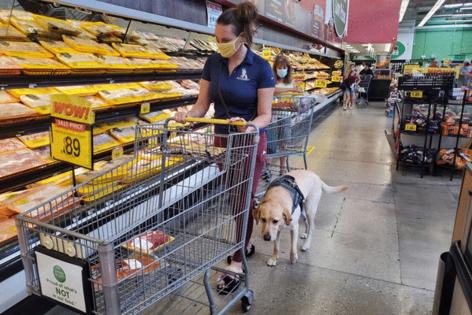 Her nails clicking on the kitchen floor as she danced about, Lisa looked more like an exuberant puppy than the highly trained service animal that helps Clark-Gutierrez manage the symptoms of post-traumatic stress disorder.

“Having her now, it’s like I can go anywhere,” Clark-Gutierrez said. “And, yes, if somebody did come at me, I’d have warning — I could run.”

A growing body of research into PTSD and service animals paved the way for President Joe Biden to sign into law the Puppies Assisting Wounded Servicemembers (PAWS) for Veterans Therapy Act. The legislation, enacted in August, requires the Department of Veterans Affairs to open its service dog referral program to veterans with PTSD and to launch a five-year pilot program in which veterans with PTSD train service dogs for other veterans.

Clark-Gutierrez, 33, is among the 25 percent of female veterans who have reported experiencing military sexual trauma while serving in the U.S. armed services.

Military sexual trauma, combat violence and brain injuries are some of the experiences that increase the risk that service members will develop PTSD. Symptoms include flashbacks to the traumatic event, severe anxiety, nightmares and hypervigilance — all normal reactions to experiencing or witnessing violence, according to psychologists. Someone receives a PTSD diagnosis when symptoms worsen or remain for months or years.

That’s what Clark-Gutierrez said happened to her after ongoing sexual harassment by a fellow airman escalated to a physical attack about a decade ago. A lawyer with three children, she said that to feel safe leaving her home she needed her husband by her side. After diagnosing Clark-Gutierrez with PTSD, doctors at VA hospitals prescribed a cascade of medications for her. At one point, Clark-Gutierrez said, her prescriptions added up to more than a dozen pills a day.

“I had medication, and then I had medication for the two or three side effects for each medication,” she said. “And every time they gave me a new med, they had to give me three more. I just couldn’t do it anymore. I was just getting so tired. So we started looking at other therapies.”

And that’s how she got her service dog, Lisa. Clark-Gutierrez’s husband, also an Air Force veteran, discovered the nonprofit group K9s for Warriors, which rescues dogs — many from kill shelters — and trains them to be service animals for veterans with PTSD. Lisa is one of about 700 dogs the group has paired with veterans dealing with symptoms caused by traumatic experiences.

“Now with Lisa we take bike rides, we go down to the park, we go to Home Depot,” said Clark-Gutierrez. “I go grocery shopping — normal-people things that I get to do that I didn’t get to do before Lisa.”

(UPI) A goat entered a government office in India and was caught on video walking off with a file full of papers from inside the building.

The video, filmed outside the Panchayat Secretary office in Chaubepur, Kanpur, ...Read More

There are plenty of myths about our pets that we’ve grown up to believe, and have no reason to question. But some of these half-truths that have been passed down from generations can actually harm your pet, so it’s ...Read More