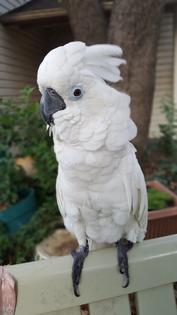 (UPI) An animal sanctuary in North Carolina is attempting to recapture an umbrella cockatoo that escaped from its closure during a break-in.

The Dunrovin Exotic Animal Rescue in Vass said the exotic bird, named Oliver, fled when a burglar broke into the facility on Thanksgiving and damaged the bird's enclosure.

"We're not sure if someone was trying to steal him, or think he's trying to do the right thing by letting him go," Jacob Seebode, a caretaker at the sanctuary, told WRAL-TV.

Seebode said Oliver has never lived in the wild and is in danger from predators, including hawks and eagles.

"Letting him go was not the right thing to do," Seebode said. He said Oliver also does not know how to forage for his own food.

Seebode said Oliver has repeatedly been spotted near the sanctuary since his release, but keepers have been unable to capture him.

The sanctuary recommended that anyone who spots Oliver try to lure the bird with peanuts or almonds.

There are plenty of myths about our pets that we’ve grown up to believe, and have no reason to question. But some of these half-truths that have been passed down from generations can actually harm your pet, so it’s ...Read More

(UPI) A New York woman whose dog went missing five years ago was reunited with the canine when the pet turned up at a shelter 1,000 miles away in Tennessee.

DEAR JOAN — I'm writing about my friend and her 5-year-old cat.

He is lovable to her. He needs a lot of attention, which she makes sure he gets. She plays with him a lot. Instead of just walking away, like most cats I ...Read More

As a responsible dog owner, it’s very important to make sure that your dog is comfortable and well-behaved around others.

Socializing your puppy is critical and should start early on, as it sets the stage for your ...Read More