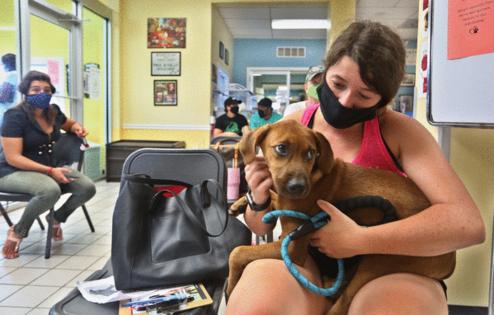 TAMPA, Fla. -- In the pandemic summer of 2020, Sarah Logar went to the Humane Society to find a canine friend. She was thinking black Lab, but there was this long-limbed puppy, caramel coat, big brown eyes, and very happy to see her. She was smitten.

A year later and the dog she named Nike Blue is the darling of her Facebook page, diving in a pool, rolling blissfully on his back, looking doe-eyed at the camera. Currently, they are working on him not expressing his enthusiasm through jumping.

“He loves to cuddle, which is awesome because that’s what I wanted,” said Logar, 24. “He’s kind of a goofball. He’s my little sunshine.”

Turns out what some feared might follow the intense interest in adopting shelter pets in the pandemic — with people in Tampa Bay waiting in lines and even camping overnight in a shelter parking lot — largely has not happened: Pets are not being returned in droves as life inches back toward normal.

“I think people just reevaluated their lives during the COVID episode and realized that pets do a lot to the quality of their lives,” said Doug Brightwell, director of Pinellas County Animal Services.

While some rescue organizations have reported higher numbers of returns, local and national animal advocates say they’ve seen no pattern of people surrendering the ones they adopted during those very isolated months.

“We’re not seeing the trend of animals brought back,” said Maria Matlack, spokeswoman for the Humane Society of Tampa Bay. “It’s just the typical return rate we usually have, which is small.”

“We did worry a little bit — we’ve never been through this before so we didn’t know what the trend was going to be,” Matlack said.

Brightwell said animals are usually returned in one or two weeks. “Once they’ve been there a month, that dog or cat’s part of the family,” he said.