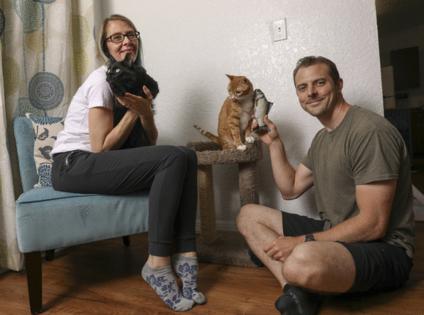 On Sunday, Cole’s owners posted on Facebook that the family would be saying goodbye to the cat later that day.

“He put up a brave fight that was helped by all of the love you sent his way, but his body can’t support itself any longer and he let us know it’s time,” the post reads. “We’ll be furever grateful for the amazing support you’ve sent our way over the past 9 years.”

Chris Poole and his wife, Jessica Josephs, are the local couple behind the cats. According to Tampa Bay Times archives, the couple adopted Cole when he was just a 6-ounce kitten back in 2012. A friend had found him, flea-infested and alone, on the side of the road in Pasco County. The couple bottle fed him until he was strong.

Marmalade was adopted next. Then came the videos that made the cats a household name. Over 1.4 million people followed their Cole and Marmalade videos on YouTube, and another 2 million followed the cats on Facebook. The feline duo made appearances on "Ellen" and the cover of Modern Cat magazine. Along the way, Poole and Josephs used their platform to educate folks on the importance of adopting black cats and FIV-positive cats.

By March 2020, a lawsuit between the cats’ owners and their former partners in Digital Pet Media stopped Poole and Josephs from posting cat pictures online. After a confidential settlement that August, the posts resumed.

The cats have long battled sickness.

Marmalade is positive for FIV, feline immunodeficiency virus, and survived lymphoma. Most recently, Cole was fighting cancer. According to an Instagram post, abdominal scans found that Cole’s left kidney had a mass on it, surrounded by fluid, in late September.

Cole will be missed.

“This handsome house panther had a pawsome life,” said Sunday’s post. “And made a big difference in the world.”

(UPI) Emergency responders in Hungary came to the rescue of a family dog that ended up with its head stuck through a hole in an iron door.

(UPI) Firefighters in Florida came to the rescue of a kitten that crawled up into the inner workings of a Tesla and became stuck.

Estero Fire Rescue said a crew was dispatched to Hertz Headquarters in Estero when a kitten...Read More

DELRAY BEACH, Fla. — It started with one defenseless kitten wandering in a circle by itself on Lake Ida road.

“I pulled over and picked her up,” said Delray Beach City Commissioner Juli Casale. “She was so tiny, ...Read More

Hiking is a great way to take advantage of the cool fall weather and beautiful foliage. Many dog owners can agree that no one makes a more willing and eager hiking buddy than your dog. Going for hikes with your dog is a ...Read More