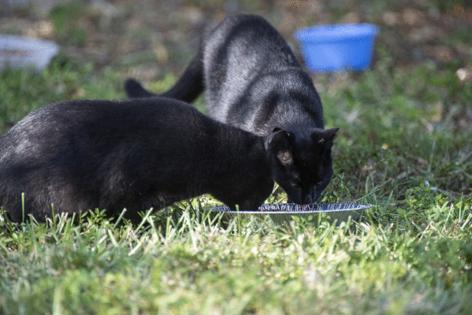 DELRAY BEACH, Fla. — It started with one defenseless kitten wandering in a circle by itself on Lake Ida road.

“I pulled over and picked her up,” said Delray Beach City Commissioner Juli Casale. “She was so tiny, she needed to be fed formula. Once I brought her home and she stayed.”

She took in another stray the next year, but one commissioner can rescue only so many stray cats when thousands are roaming her city’s streets.

To limit the growth of “community cats,” Delray Beach is spending $25,000 for a new neutering and vaccination program.

There are likely between 7,000 and 11,000 stray cats in Delray Beach, said Heidi Nielsen, director of information and outreach for Peggy Adams Animal Rescue League. Countywide there are between 150,000 and 200,000 stray cats, Nielsen said. And if left unchecked, those numbers can surge exponentially and pose health risk to residents.

“Those cats can produce as many as three litters a year in Florida and each of those can have four to six kittens and they start reproducing as soon as five months of age,” Nielsen said. “So one female cat and her offspring can produce a tremendous amount of kittens in a short period of time.

Casale, who’s spearheading the initiative, frequently feeds community cats, which are often malnourished and defenseless. “If we don’t help them, who’s going to?” she said.

Feral kittens suffer an abnormally high mortality rate of 75% rate, Nielsen said, attributing it to a variety of factors, including lack of food and water, being attacked by dogs or other animals and being run over by cars.

“If you have a large population of cats that does not have rabies vaccination that are continuing to breed, they’re overcrowded and often times not having enough food,” Steele said.

“They’re more susceptible to picking up rabies from the local raccoons because they’re going to the same food sources. If they’re in the same community as humans, you’re putting [people] at risk for rabies as well.”

To combat the issue, Delray Beach is adopting a trap-neuter-vaccinate-release (TNVR) initiative. Animal experts use traps to capture stray cats and then transport them to a veterinarian. After being given anesthesia, vet technicians will neuter or spay the cat, provide a rabies vaccine and implant a microchip. The whole process takes roughly an hour, Steele said. Afterward, the cat is returned to its original territory.

The program is being done in coordination with Peggy Adams and Purrzilla Cat Rescue. Paul Bates, who coordinates the TNVR program for Peggy Adams, said they’re planning on starting around November and are hoping to finish by February.

Between the facilities at Peggy Adams, Tri-County Humane Society and Palm Beach County Animal Care and Rescue, they can do about 200 procedures per week.

In addition to the TNVR program, Steele recommends people who have housecats keep them indoors to prevent them from potentially mating with unneutered or unvaccinated animals. She said a good compromise for people with screened-in porches to design a “cat-io” — a patio tailored for a cat.

“Your car has a little kitty door that allows him to go into the screened-in patio, get some sunlight, some fresh air,” Steele said. “It’s lush, but it keeps them in your property.”

Hiking is a great way to take advantage of the cool fall weather and beautiful foliage. Many dog owners can agree that no one makes a more willing and eager hiking buddy than your dog. Going for hikes with your dog is a ...Read More

MINNEAPOLIS — Just after sunrise on a recent Sunday, travelers hustling through MSP airport got an eyeful of cute near Gate C25: a curly-haired puppy, looking almost like a teddy bear come to life.

My wife, Ikuko, and I exchanged looks. No words were necessary.

The roughly 1-week-old kitten we'd just picked up from a Los Angeles shelter was much smaller than we ...Read More