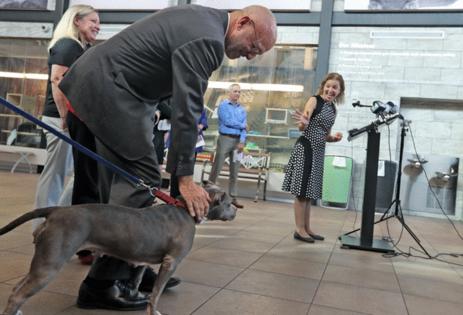 But a group of U.S. lawmakers say the ban, implemented by the Centers for Disease Control and Prevention, is unnecessary, and they’re taking action.

U.S. Rep. Ted Deutch, D-Boca Raton, a self-proclaimed animal lover, recently sent a letter to the CDC on behalf of 57 politicians from both sides of the aisle, asking the organization to reevaluate the ban, saying there are better options.

“The U.S. House recently passed an amendment to provide CDC with $3 million for a more rigorous screening program for dogs about to enter the U.S.,” the letter said. “That is a far more discerning and sensible approach than a categorical ban of dog imports from more than 100 nations.”

The CDC implemented the ban on dogs from 113 countries in July because it identified a “significant increase” in the number of dogs denied entry into the U.S. from high-risk countries compared to the previous two years..

Among the countries in the ban are Brazil, Cuba, Ecuador, Colombia, Haiti, Venezuela, Dominican Republic, Peru, China and Russia.

The representatives said the restriction on dogs especially affects U.S. families that were overseas, adopted a dog, and want to bring the pet back with them, as well as U.S. service members who want to bring their K9s home.

The politicians think the dogs and their potential adoptive families are being treated unfairly.

“Many Americans choose to adopt pets from overseas, saving them from grim lives in captivity or from painful deaths,” the letter said. “By opening their hearts and homes to adopted dogs from other countries, they save a dog’s life and gain a loving pet.”

MINNEAPOLIS — Just after sunrise on a recent Sunday, travelers hustling through MSP airport got an eyeful of cute near Gate C25: a curly-haired puppy, looking almost like a teddy bear come to life.

My wife, Ikuko, and I exchanged looks. No words were necessary.

The roughly 1-week-old kitten we'd just picked up from a Los Angeles shelter was much smaller than we ...Read More

All pets, like people, get sick or have a medical emergency at some point in their lives.

But unlike with human medicine, many people have not considered or accurately estimated the cost of care or how they would pay ...Read More