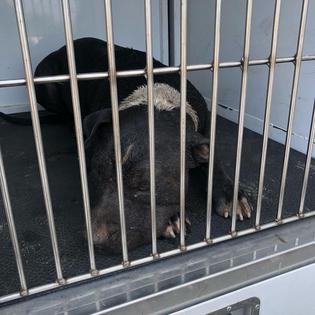 (UPI) Emergency responders and municipal workers gathered in a California city to rescue a large dog that became stuck in a small drain pipe.

Tuolumne County Animal Control said officers were called out Monday on a report of an animal trapped in a drain pipe, and they arrived to find a large pit bull wedged in the small pipe.

Animal control shared a video of the dog "appreciating their bath" after being removed from the pipe.

The agency said the dog was taken to the city's shelter and was to be evaluated by a veterinarian.

September is Responsible Dog Ownership month. Sure, puppies are adorable, but those cute, cuddly puppies are completely dependent on their owners to help them become happy, healthy, well-adjusted adult dogs.

Melody Bond of Livonia, Mich., loved her 2014 Chevrolet Camaro muscle car so much she named it Esmeralda.

But Esmeralda had to go when Bond's all-white German Shepherd puppy, Jasper, grew up and got too big for the sports...Read More

(UPI) Officials at a zoo in India confirmed a royal Bengal tiger escaped from its enclosure, leading to an evacuation of the facility.

OSU's College of Veterinary Medicine, which previously made ...Read More