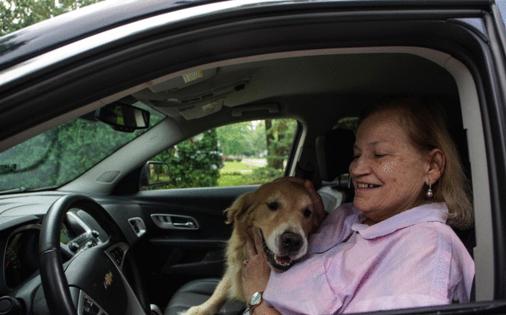 Melody Bond of Livonia, Mich., loved her 2014 Chevrolet Camaro muscle car so much she named it Esmeralda.

But Esmeralda had to go when Bond's all-white German Shepherd puppy, Jasper, grew up and got too big for the sports car.

"He weighs 100 pounds and when he sat in the Camaro, his head touched the ceiling and his feet were on the floor," Bond said. "It was ridiculous. Even just to go to the vet, it was just too much."

So last summer, Bond replaced Esmeralda with a 2017 Jeep Wrangler "Big Bear." It has a rear-seat net partition to keep Jasper safely in the back.

She named it Freedom. "I want to go to the U.P. aurora hunting and I want to take a big dog with me for protection," Bond said. "He's going to be my travel partner now."

With the Wrangler's water-resistant, easy-to-clean interior, safety hooks for a harness and a large cargo area to fit a crate, it's not surprising the Wrangler makes most top-10 lists of dog-friendly cars. But there are some cars on the lists that might surprise you: the Corvette, for example, and Tesla models, thanks to their innovative "Dog Mode" technology.

Canine consideration is a big factor among car buyers when they pick out their next ride, dealers, industry experts and consumers say.

'Along for the ride'

CarGurus has not done an official consumer-insight survey yet, "so the evidence I have is anecdotal, but pretty much anyone who's met a dog owner in their life knows their dog plays an incredible role in their life and in their decisions," Smith said.

(UPI) Officials at a zoo in India confirmed a royal Bengal tiger escaped from its enclosure, leading to an evacuation of the facility.

OSU's College of Veterinary Medicine, which previously made ...Read More

(UPI) Animal rescuers in Britain said a kitten survived a journey of about 230 miles from Wales to Leeds, England, in the engine compartment of a car.

The RSPCA said the driver told rescuers he arrived in Leeds and opened...Read More