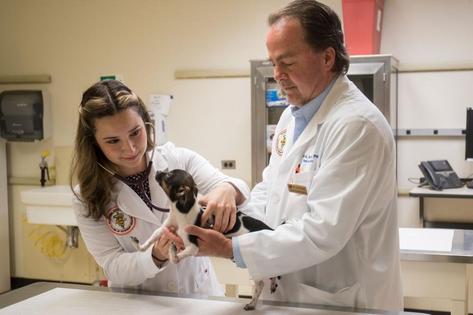 OSU's College of Veterinary Medicine, which previously made headlines for performing a similar procedure on a dog named Milo, said the rat terrier puppy, Siggi, was born with her paws facing upward instead of downward.

"As with Milo, Siggi's problem looked like it was in the paws, but it was actually in her elbows," Dr. Erik Clary, who performed the surgeries on both canines, said in a news release.

"For reasons not fully understood, these patients' elbows come out of joint early in life and the result is severe rotation of the lower front limbs and an inability to walk. At most, they might muster a crawl that seems most uncomfortable and is poorly suited for a dog's life," Clary said.

Clary said Siggi's case was found to be even more complicated than Milo's because of a deformity in the lower part of her elbow.

"The CT helped us plan a more complex procedure that would require an intentional break high up in her ulna bone to de-rotate the limb," Clary said.

Siggi underwent surgery May 12. Oklahoma State said her splints have been removed and she is learning to walk.

"Lorraine, her medical foster with Dallas Dog RRR, did a fabulous job implementing an incremental rehabilitation regimen that now has Siggi doing many things that puppies like to do, including chasing a ball in the yard. Truly, I could not be more pleased with Siggi's progress," Clary said.

(UPI) Animal rescuers in Britain said a kitten survived a journey of about 230 miles from Wales to Leeds, England, in the engine compartment of a car.

The RSPCA said the driver told rescuers he arrived in Leeds and opened...Read More

(UPI) Animal welfare authorities in New York said a cougar is on its way to Arkansas after being surrendered by an owner who was keeping the 80-pound animal in a Bronx, N.Y., apartment.

The Humane Society of the United ...Read More

As a responsible dog owner, it’s important to make sure that your dog is comfortable and well-behaved around others. Socializing your puppy is critical and should start early on, as it sets the stage for your dog to ...Read More

DEAR JOAN — Etta is my 3-year-old purebred rat terrier. We have a great yard that is her sanctuary.

We used to take walks at different locations. She has always had a narrow comfort zone, but usually would go along for ...Read More