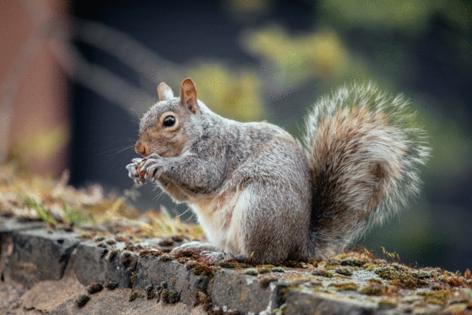 DEAR JOAN — On a recent show, Stephen Colbert was talking with Alan Alda about acting, and he said that to understand how people can feel embarrassed or uncomfortable, he used to do this silly walk in public that he said was a squirrel walking and pooping at the same time.

Alda appeared doubtful that squirrels do that. We got to talking and realized we'd never seen a squirrel poop. Is that really how they do it? If so, we need to spend more time watching the squirrels in our yard.

DEAR A. AND S.: I love Stephen Colbert's sense of humor and his intelligence, but he's relying on some bad information when it comes to squirrels and poop.

His silly walk was more imagination than impersonation. Squirrels are much more secretive when it comes to bathroom behavior.

They are so discreet that a myth arose claiming that they never poop. As we have few reports of squirrels exploding, it's pretty obvious the myth doesn't hold its water.

Squirrels have few defenses when it comes to protecting themselves from the many predators that like to eat them. Their teeth and nails can be sharp, but they are nothing compared to the talons of a hawk, the powerful jaws of a coyote, and the razor sharp claws of cats.

A squirrel's first instinct is to run. Its second is to avoid possible confrontations, and to do that, they usually create latrines away from their nests so that other animals can't use the scent to track them to their homes.

Mother squirrels actually carry their babies' poo and pee away from the nest to help protect them.

I applaud Colbert's acting method and I certainly appreciate his funny walk, but he should probably call it something else.

DEAR JOAN: I just read about a man and his cat in your column. We are having a horrible time out here with coyotes jumping over fences into backyards and digging under fences to get in when small dogs and cats are in their own yards, and killing and eating them.

This has happened just in the last 10 days and the coyotes are seen walking around local neighborhoods. Please warn people in your column not to have their pet in their backyard alone — several of these people are seniors and do not know this is going on.

Animal Control does not care and refuses to do anything unless they attack a person, like what happened in Moraga and Lafayette.

DEAR SUE: Thanks for the warning, Sue. As fires and drought continue to plague California, animals are moving in closer to developments, where they're finding food and water. That means we need to be more vigilant when it comes to our pets.

It's not that Animal Control doesn't care, but their job is dealing with domestic animals. State or federal fish and wildlife concern themselves with the wild animals.

Coyotes are trying to survive and will eat what they can find. It's our job to make sure that's not our pets.

TAMPA, Fla. -- In the pandemic summer of 2020, Sarah Logar went to the Humane Society to find a canine friend. She was thinking black Lab, but there was this long-limbed puppy, caramel coat, big brown eyes, and very happy ...Read More

(UPI) An athlete from the Netherlands who stands at 5 feet,11.92 inches has been declared the tallest female bodybuilder in the world by Guinness World Records.