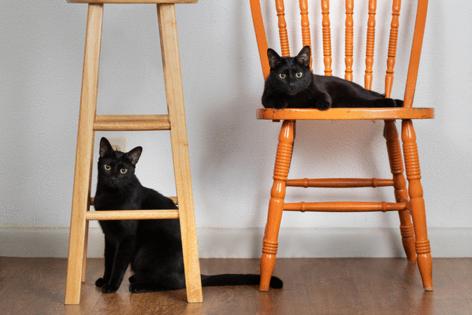 Researchers at the University of California, Davis have discovered a new way to administer heart medicine for cats.

Hypertrophic cardiomyopathy, otherwise known as HCM, affects 1 in 7 cats. It leads to the thickening of the heart muscle and cats can form blood clots as the condition worsens, leading to extreme pain or even sudden death.

Cats are typically prescribed clopidogrel to prevent clots from forming. However, co-authors and veterinary cardiologists Josh Stern and Ron Li from UC Davis consistently saw at least 20% of cats continue to form blood clots despite being on the drug.

During their study, Stern and Li tested the ability of the cat to form clots, had their owners administer clopidogrel, then tested whether mutations in the cat genome affected the effectiveness of the medication.

Their results published in Nature's Scientific Reports showed how certain mutations affected the response of the cats to therapy.

The study is "one of the first times we've shown that medications prescribed for cardiac disease in cats may be impacted by a cat's own DNA," Stern said.

"This is a game changer," Li said. "I think this is a step for precision medicine."

Human medicine has utilized genetic testing. For example, someone could go to a drugstore and pick up a saliva testing kit. Li and Stern faced challenges because genetics and mutations within the cat genome are less understood.

"We hope that a genetic test becomes part of the standard of care of treating this really common and devastating disease in cats," Stern said.

There was also difficulty in recruiting viable patients for the clinic trials and more difficulty in understanding how the cats responded to the therapy. Cats "don't come in and tell you how how they're feeling on their drugs," Stern said. "We have to rely on their owners and use validated questionnaires.

"Both Dr. Li and I hope that this further opens the door to understanding the true benefit of personalized medicine in veterinary species."

Stern and Li look to offer this genetic test at the UC Davis laboratory in the near future.

SAN DIEGO — As she typed on a laptop computer on the dining room table last month, wrapping up some work for her job at UC San Diego, Yvonne Grobe could feel the weight of a very serious stare burning into her from the ...Read More

Hurricane season has begun. Being prepared is essential during an emergency to be sure that everyone, pets included, is cared for. The American Kennel Club shares the following tips to keep your dog safe in the event ...Read More

(UPI) Animal rescuers in India were summoned to a school to relocate a leopard that wandered into the cafeteria after an apparent confrontation with a rival.

DEAR JOAN — I discovered a hummingbird nest in the corner of my backyard on May 5, hidden in the crook of my rose tree. The two eggs hatched about 10 days later, and I enjoyed watching the mother hummer scare off the ...Read More

DEAR JOAN — I discovered a hummingbird nest in the corner of my backyard on May 5, hidden in the crook of my rose tree. The two eggs hatched about 10 days later, and I enjoyed watching the mother hummer scare off the ...Read More

(UPI) An African serval that surprised a sleeping Atlanta woman by jumping on her bed has been safely captured, officials said.

The Georgia Department of Natural Resources confirmed Thursday that the serval, a large ...Read More