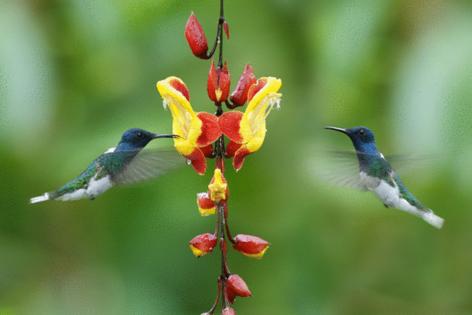 DEAR JOAN — I discovered a hummingbird nest in the corner of my backyard on May 5, hidden in the crook of my rose tree. The two eggs hatched about 10 days later, and I enjoyed watching the mother hummer scare off the jays and the two growing larger and stronger.

One day when I approached, they both flew out of the nest! I was beside myself that I had hurt them by scaring them, but they were back in the nest later. It's now about a month later and I believe the three of them have been hanging around, nesting in my neighbor's tree. Is it possible?

The feathers on the two of them are still rather brown, instead of the iridescent color of their mother. They hang around for the morning watering of the vegetable garden and play in the spray as I water.

Could it still be them or am I just imagining it? What a privilege this has been to witness!

DEAR DONNA: It most likely is the same little family, but they won't stay around for much longer.

While some mother birds are done with child rearing once their offspring leave the nest, the hummingbird mom continues to feed her young fledglings for a bit longer, while teaching them how and where to find the best food, and protecting them from predators.

Some hummer moms cut the apron strings after a couple of days, while others continue to feed and instruct the young hummers for up to two weeks. After that, they scare the youngsters away to encourage them to live their own lives. Siblings may stay together until autumn, however once they've fledged, they won't return to the nest.

Newly hatched hummingbirds are naked when they come out of the egg, but within two weeks, they've grown feathers and at three weeks, they're ready to fly. They are adult sized by the time they leave the nest, but their coloring has yet to come in, making it difficult to tell the youngsters from the mom, or know the sex.

That's just nature's way of offering a little more protection for the birds. The female is less brightly colored than the male, which allows her to be less obvious while making her nest, laying her eggs and raising her young. The babies likewise are rather bland, giving them a better chance at survival.

Later in the summer, the young hummers will molt and their adult coloring will emerge, which will identify their sex.

Hummingbirds can have up to three broods a year, so keep an eye out. Mama bird might already be sitting on another pair of eggs in the same nest or a new one nearby.

DEAR JOAN: I took my hummer feeders down for lack of birds. Should I try again later or wait for a new year?

DEAR MARGY: If you aren't getting hummingbirds in your yard, it doesn't make sense to keep putting out food, especially since you'll need to keep refreshing it with new nectar to avoid mold and other contamination.

You could put it out and see if you get any takers, but a better idea might be to first put out some blooming plants — red flowers are the best attractors — to get the birds' attention, then put your feeder out.

Recently, I answered a question about a new puppy that was having trouble sleeping in his bed without whining and barking through the night. I suggested some crate-training tips, but I’ve had lots of emails from across ...Read More

(UPI) Police in New York conducted an unusual rescue when a resident called to report a kitten was trapped in the engine compartment of their vehicle.

(UPI) A 15-year-old dog that went missing from his owner's Florida home was reunited with the woman nearly a year later when she spotted his photo on an animal rescue's social media page.