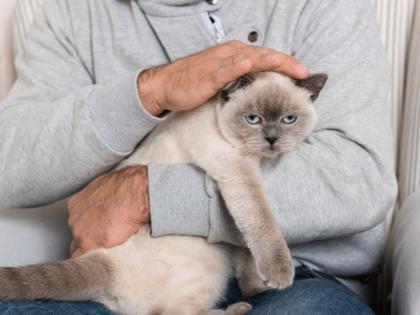 PHILADELPHIA — Any cat lover who has watched an allergic friend react to a beloved pet knows the dark powers that lurk in that luxurious feline fur. Within minutes, an allergic human exposed to a cat can begin sneezing and wheezing. Eyes water and itch. The misery is obvious.

Solutions for people who want to be around cats despite allergies are labor-intensive, of questionable value, and sometimes defy common sense. How many emergency department trips would ensue if we all tried to give our cats frequent baths?

This predicament has triggered the imagination of researchers, who see a lucrative market for better solutions in a country that has more than 50 million cats in more than 20 million homes. Some scientists are now taking a different approach to human pet allergies. Rather than trying to change allergic humans or their environment, they're trying to change cats.

Purina began the competition in the early days of the pandemic with a cat food — Pro Plan LiveClear — that it says can reduce the protein that most allergic people react to by 47% after three weeks.

"This is really, in my mind as a veterinarian, a ground-breaking and revolutionary pet food," said Kurt Venator, Purina's chief veterinary officer. "We truly believe this is going to help cats and people get closer together."

Another research group based in Switzerland is working on a vaccine against the offending protein, called Fel d 1. And a team from Indoor Biotechnologies in Virginia is exploring CRISPR gene-editing techniques to knock out the gene that makes Fel d 1. Those two projects are years from fruition.

Indoor Biotechnologies primarily detects, tests for, and purifies allergens. Martin Chapman, its president and CEO, had a long interest in cat allergens, but a bogus company that marketed fake hypoallergenic cats until about 2015 really got his attention.

"It sort of established there was a market for cats that would be up to $7,000 apiece," said Chapman, a former professor of medicine and microbiology at the University of Virginia.

Although some cats may wind up in shelters because allergic owners couldn't live with them, allergists said there is no doubt that many often choose their cat over their own comfort. They said it is rare that an allergic cat owner will give up the cat or even banish it from the bedroom.

"I haven't really encountered patients who are willing to get rid of their cats," said Patrick Gleeson, a Penn Medicine allergist. Of the new cat food, he added, "I think there's a huge market for this product."

(UPI) A pair of Canadian pets with a unique hobby set a Guinness World Record for the fastest 5 meters on a scooter by a dog and cat.

DEAR JOAN: My adult daughter is struggling with sleep deprivation because her new 4-month-old puppy won’t let her sleep through the night. Any tips?

She and her husband got a puppy Monday from a rescue group where the ...Read More

(UPI) A pair of exotic African servals are on the loose after escaping from the barn where they were being kept in Alabama.

(UPI) Fans at a University of Miami football game used a U.S. flag to break the fall of a cat that fell from the upper deck.

Craig and Kimberly Cromer said it was the second quarter of the school's game against the ...Read More