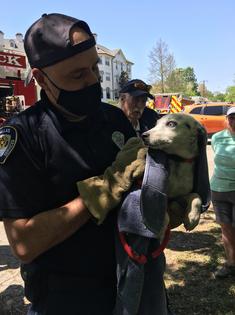 (UPI) A stray dog that climbed up into the engine compartment of a parked car in Dallas found a new home with the firefighter who rescued her.

Maryanne Davidson said she was taking a walk with friends in the White Rock area, and they returned to her SUV to find a small dog underneath the vehicle.

Davidson said she and her friends attempted to get the animal out from under the vehicle, but the canine fled up into the engine compartment.

A Dallas Fire-Rescue crew was summoned to the scene, and firefighters removed a tire from the SUV so they could access the engine compartment from the bottom and the top.

They safely extracted the dog, which was taken to Dallas Animal Services and Adoption Center. James Tooter Hayes, one of the firefighters who conducted the rescue, visited the animal services facility two days later to adopt the dog, whom he named Grace.

(UPI) A tiger living at a Texas sanctuary was declared by Guinness World Records as the oldest living tiger in captivity at the age of 25 years and 319 days old.

(UPI) A Michigan sheriff's K-9 and his handler came to the rescue when a woman visiting a beach lost her wedding rings.

Elsa Green said in a Facebook post that she was visiting the beach at Eagle River with her family ...Read More