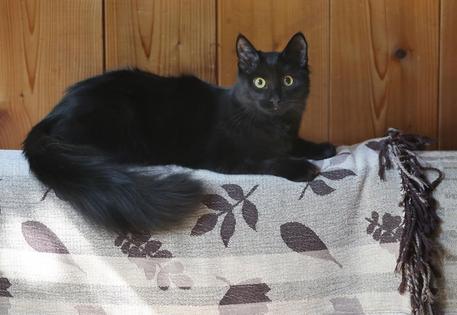 (UPI) An Iowa woman said her kitten bears a strong resemblance to her old cat for a very good reason -- he's a clone.

The Cedar Rapids woman, who wanted to remain anonymous, said she decided before the death of her cat, Mr. Tufts, that she wanted to have the feline cloned.

"I had never had such a wonderful creature. It was harder losing him than any other cat I've ever had," the woman told The Courier newspaper.

ViaGen Pets specializes in genetic preservation and cloning for household pets. The firm has cloned dogs, cats and horses in the past and recently made headlines for cloning an endangered Przewalski's horse for San Diego Zoo.

ViaGen preserved the samples until after Mr. Tufts' death, when his owner requested the cloning go forward.

Melain Rodriguez, ViaGen client services manager, said specialists used one of the frozen cells to replace the nucleus of a female cat's egg. The embryo was then transferred to a surrogate mother cat in a method similar to in vitro fertilization.

Mr. Tufts' genetic twin, Mr. Tufts Jr., is now 9 months old. He came to live with his owner, who also adopted the surrogate mother cat, when he was 2 months old.

"The only physical difference, as far as I can see, is in health and body condition. The original T had been found on a forest trail and had a very bad respiratory illness," the owner said.

ViaGen said cloned pets maintain the same appearance, intelligence and temperament as the animals they are cloned from.

"When we produce the clone it's an identical twin. There is zero genetic modification occurring," Blake Russell, president of ViaGen Pets, told KXAN-TV.

The feline's owner said Mr. Tufts Jr. reminds her a lot of his namesake, although she has noticed some differences.

"Our new Mr. Tufts Jr. is much more athletic than our original, probably because he, and mom cat, too, had the best of care," she said.

(UPI) A tiger living at a Texas sanctuary was declared by Guinness World Records as the oldest living tiger in captivity at the age of 25 years and 319 days old.

(UPI) A Michigan sheriff's K-9 and his handler came to the rescue when a woman visiting a beach lost her wedding rings.

Elsa Green said in a Facebook post that she was visiting the beach at Eagle River with her family ...Read More