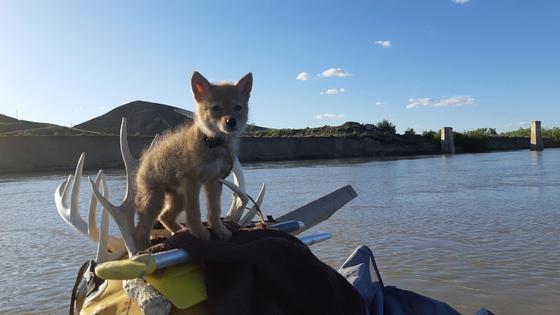 (UPI) A man on a multiday rafting trip in Saskatchewan rescued a drowning coyote pup and brought the animal along for the last 10 days of his trip.

The Wildlife Rehabilitation Society of Saskatchewan said a man identified as Justin was on a rafting trip down the Red Deer and South Saskatchewan rivers when he spotted the small coyote struggling to swim.

Justin reached out to pluck the coyote out of the water, but fell off his raft. He was able to grab the pup and his raft before it floated away.

The pup did not appear to be breathing when Justin got it out of the water, but he revived it by pushing on its stomach in a modified CPR technique.

The rescue group said the pup accompanied Justin on the next 10 days of his trip.

"The little pup would eat with Justin, cuddle in his jacket, and sleep in his backpack while they rafted down the river," the WRSOS said.

Justin eventually got a phone signal and called his wife, who helped him contact various animal rescue organizations. The Swift Current SPCA put Justin in touch with the WRSOS.

The pup, which Justin dubbed YipYip, will be cared for by a WRSOS rehab expert until it is old enough to be released back into the wild, the group said.

(UPI) A 1-year-old dog born without rear paws is now learning to walk in Florida with a set of custom-made prosthetic legs and paws.

(UPI) Police and animal rescuers in New York came to the assistance of a kitten that fell 20 feet down into a storm drain.

(UPI) A dog who had been missing from her Ohio home for five days was reunited with her owners after firefighters used a sledgehammer to free her from between two concrete walls.

As the country reopens, so does the ability to travel. Some of us may want to take our dogs along for the ride. Before you and your dog jump in the car or hop on a plane to your next destination, here are things to ...Read More

Researchers at the University of California, Davis have discovered a new way to administer heart medicine for cats.

Hypertrophic cardiomyopathy, otherwise known as HCM, affects 1 in 7 cats. It leads to the thickening of ...Read More