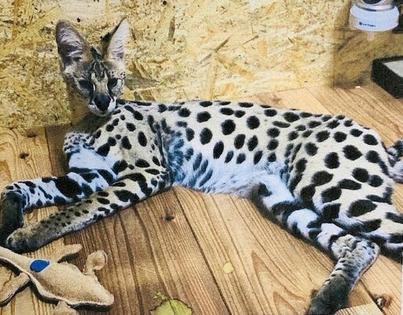 (UPI) Officials in a Japanese city said a serval, an exotic cat native to Africa, was captured after about two weeks on the loose.

The City of Shizuoka said the 1-year-old cat, which was being kept as an exotic pet in the city, escaped June 27 and was on the loose for over two weeks before being captured Monday.

Officials said a witness spotted the serval wandering near Shizuoka Heliport, more than half a mile from its owner's home, and alerted authorities.

The cat was safely captured without injury.

Officials said the serval's owner told authorities the cat had been acting agitated and escaped when the owner opened its cage to check on it.

Servals require permits to be kept in the city, officials said. It was unclear whether the cat's owner had a permit for the animal or whether it would be returned to the owner.

(UPI) A New York dog who fled from a sitter in Manhattan was found seven days later in Queens after crossing between the boroughs via the Queens Midtown Tunnel.

His name was Cooper. I introduced the world to him back in 2016 after a family trip to Great Bear Lake in Michigan. We rented a place on the lake and soon met ...Read More

NORFOLK, Va. — Cayla Harper’s two jobs require her to keep her cool. She interacts with the public, helping people in distress, even saving lives as she splits her summer weeks between working as a firefighter/medic ...Read More

(UPI) A Philadelphia contractor who was taking down a wall at an abandoned home when a kitten fell out ended up rescuing nine cats and seven kittens from the inside the wall.

"Etiquette" describes the requirements of behavior according to the conventions of society. This includes proper conduct that is established by a community for various occasions in everyday life.