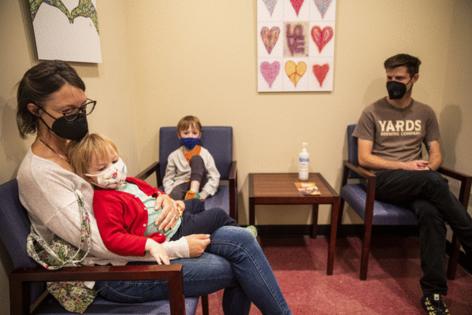 The first-grader attends Gladwyne Elementary in the Lower Merion School District (LMSD), which has seen an unusually high numbers of kids out sick with a potpourri of nasty viruses: flu, common colds, COVID-19, and upper respiratory viruses, like respiratory syncytial virus, or RSV.

Things got so bad at the nearby middle school earlier this month that school administrators contacted local health officials for advice after noticing "a high number" of students out sick at Black Rock Middle School in Villanova, according to LMSD spokesperson Amy Buckman.

With viral illness spiking across Greater Philadelphia and beyond, the Main Line community's chief public health officer, Richard Lorraine, said he's increasingly worried about what he and other doctors nationwide are calling a "triple-demic," with cases of flu, RSV and COVID-19 creating a tsunami of sickness.

More kids home sick also means more parents have had to take off from work. More than 100,000 Americans missed work last month because of a lack of child care — an all-time high, according to statistics from the U.S. Bureau of Labor Statistics.

For many parents and kids, this is the first full year of school since the pandemic began in which children are in school without mandatory masking, desks spaced 6 feet apart, and scattered lunch areas. And after-school activities, including fall plays and crowded football games, are in full tilt. In other words, a normal school year.

And yet, this school year is proving anything but normal. The virus season came earlier than expected and hit more kids much harder.

Mitchell's daughter, Sophia, has missed a total of seven school days since September. She felt well enough to go back Tuesday after she developed flu symptoms last week, Mitchell said.

"Ever since she's been back in school, she's been nothing but sick," said the 43-year-old mom from Villanova, who had homeschooled her daughter during the first half of kindergarten last year because she was worried about COVID-19.

Rated R for strong/disturbing violent content, language throughout and some sexual references.

What it’s about: A black satire set in the world of high-end dining, in which a celebrity chef assembles a ...Read More

Why did turkey become the national Thanksgiving go-to ...Read More

Rated PG-13 for sequences of strong violence, action and some language.

What it’s about: The sequel to "Black Panther" takes on the world without T'Challa, and Chadwick Boseman, ...Read More

Rated PG for some mild language.

The kid attractor factor: This science-forward documentary is ...Read More

The aphorism “birds of a feather flock together” describes the fact that people tend to prefer associating with others who are similar to themselves. The phenomenon goes by different names: Sociologists call it ...Read More

Rated R for some language and brief drug use.

What it’s about: A fictionalized depiction of The Jane Collective, a real-life network of women who helped other women obtain safe illegal abortions in the late...Read More