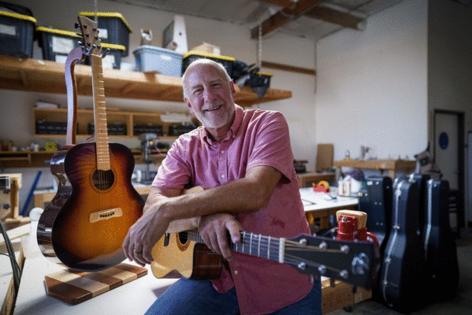 Zoe is the Greek word for "life," which is something that Weimer almost gave up on after the accidental death of his 12-year-old son Zachary in 2008. Becoming a grandfather seven years ago gave Weimer a reason to live and it helped him refocus his life priorities on both his family and pursuing full time his 30-year hobby of making guitars.

"When Zoe was born, I realized the last thing I wanted to do was put the burden I'd carried for so long on her shoulders. She made me want to live again. She reawakened me," he said. "On my darkest days, I'd grab a guitar and it would help me get through the day, so it seemed like the right name for the business."

Weimer's guitars, made to order from rare, exotic and ancient hardwoods from around the world, take up to three months to carve, build, inlay and finish, and they fetch up to $6,000. But they're priceless to the professional musicians who play them, like Nashville musician Drew Holcomb, who described his Zoe guitar as an "incredible, beautiful, unique and gorgeous instrument," and Texas singer-songwriter Zoe Zobrist, who said she loved being able to select every detail of her guitar, from the woods of the body to the neck design and the tuning pegs.

But not all Zoe Guitar buyers are professional players. Some are hobbyists who found the company's website (zoe-guitars.com) online and are intrigued by the unique woods used in the instruments, or they're moved by Weimer's personal story of triumphing over grief. One of the customers Weimer is now building a guitar for is a Seattle man who recently lost his 34-year-old son. He asked Weimer to build an heirloom guitar that he can give to his grandchildren as a keepsake in memory of their dad.

"I love talking to people about guitars," said Weimer, 59, of Oceanside. "It's been a really cool adventure."

Weimer grew up in Orange County and was studying advertising at a Santa Barbara arts school in 1986 when a friend's husband taught him the basics of guitar-making in his cabinetmaking carpentry studio. An amateur musician himself, Weimer fell in love with the hobby, but set it aside to focus on building a successful media production company in Santa Maria with his wife, Sally. Their business became so successful that the Weimers recognized they weren't spending enough time with their children, Kelly and Zachary.

So to create more family adventures and teach their children compassion and a greater worldview, the Weimers began taking humanitarian missions with their children to Guatamala, Jamaica, Cambodia and other countries for charitable causes aimed at reducing child hunger and child sex trafficking. Wherever they went, Weimer said he always brought along a guitar and gave lessons, often giving away the guitar to the students before he flew home.

Eventually, the Weimers moved their business to East Tennessee, which is where they were living when Zachary died at a church camp he was attending with his older sister. Zachary was ziplining to a landing platform when he struck a rolling staircase that should have been moved out of the way. He died from his injuries a few days later in October 2008. Weimer said he lost all interest in running his business and stepped away to focus on charity work.

Together, the couple used their media marketing skills to help nonprofits raise grant money. Then they started a university program in Hawaii with their daughter Kelly teaching college students about international cultures and religion and taking groups to Southeast Asia to teach English classes to youth in farming communities. Although the work they were doing was rewarding, Weimer said he couldn't overcome his grief until Kelly and her husband, Daniel, had a baby.

"We enjoyed the work we did, but part of me felt like I was just keeping myself busy so I didn't have to think about Zack. I had a gun to my head at one point and felt useless. A counselor taught me the only way to get through was to just think about taking my next breath, nothing more. But I still walked around like a zombie. Then Zoe was born."

After making guitars and tending a vineyard in Fallbrook for a few years, the Weimers moved to Oceanside in 2020. They now run a joint studio and shop on Copperwood Way in Oceanside, where he makes guitars and she makes custom pottery. Zoe Guitar customers can buy off-the-rack handmade guitars for around $1,200, but many Zoe customers relish the idea of having their guitars built to order.

Customers fill out a 70- to 80-question survey where Weimer determines the type of tonewoods that suit their strumming and playing style and the sound they are looking for. Some woods transmit a warm sound, others deliver brightness, earthiness and darkness. About 80 percent of the "color" of a guitar's sound depends on the type of tonewood used on the face, or sounding board, of the guitar, such as Sitka spruce or rosewood. But Weimer also works with Hawaiian koa wood, Honduran mahogany, Central American cocobolo, African bubinga, South American pao ferro and New Zealand kauri wood, which is thousands of years old.

Because Weimer's business is so unique, many customers come to watch their guitars being made, and an 18-year-old man who dreams of becoming a luthier someday is now building his own guitar under Weimer's supervision at the studio. Sally Weimer said she has enjoyed watching her husband interact with customers and blossom as an artist at Zoe Guitars.

"It's been fun watching his progression at something so unique. I'm absolutely amazed at the work he does," she said.

The toll of recent days showcases the issue. On Monday, a 14-year-old boy was charged with murder...Read More

A new study finds eating a healthy breakfast -- together at home -- goes a long way to help your children's psychosocial health.

We already know that eating a healthy breakfast is important to help children's cognitive ...Read More

CHICAGO -- Justin Pearlman was settling into his latest rehab, a $95-a-day treatment center in Pennsylvania, when the Tribune reached him for an interview about his struggle with heroin addiction.

CHICAGO -- Taylor King held her 21-month-old son, Sterling King, as he napped underneath a tent in Chicago's Jackson Park on Saturday as she remembered what it was like to have to drive 40 minutes from her home on the ...Read More

FORT WORTH, Texas — Raymond Turner was at work when he got a notification from 23andMe that his DNA test results were ready.

CHICAGO -- When Serena Stoneberg walked down the aisle of a North Side church this month, her wedding continued a family tradition that spanned seven previous brides across three generations and multiple Chicago ...Read More