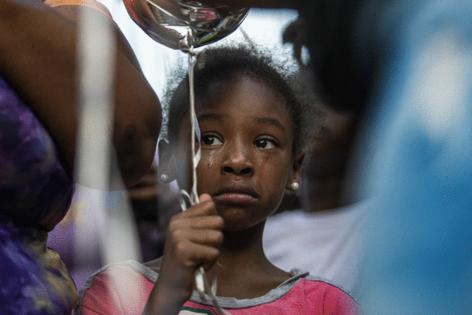 The toll of recent days showcases the issue. On Monday, a 14-year-old boy was charged with murder in the shooting of Tiffany Fletcher, a mother of three who was struck by a stray bullet on Friday afternoon while working at the Mill Creek Recreation Center. Also last weekend, 17-year-old Teryn Johnson was shot and killed while walking her dog in Frankford.

Youth advocates and city leaders discussed the impact gun violence at an online roundtable event hosted Tuesday by the Philadelphia chapter of the Transition Network Giving Circle, a philanthropic group of professional women, as part of an annual focus on the wellbeing of children.

“We have to recognize violence is a cycle,” said Kendra Van de Water, the executive director of YEAH Philly, a nonprofit that works with teens in West and Southwest Philadelphia who have been impacted by violence.

She questions those who make distinctions between “victims” and “perpetrator.” In fact, research suggests that many of the people who engage in violence have been victims of violence themselves.

Nearly 160 children and teens under the age of 18 have been shot in Philadelphia this year, a rate similar to 2021. Of those, more than 20 died. The vast majority of victims are Black. The youngest was a baby girl that has yet to celebrate her first birthday.

Many more children in Philadelphia have witnessed violence. A 2021 study out of the Children’s Hospital of Philadelphia found that a shooting increased the number of emergency department visits for mental health complaints for children in the surrounding blocks for a few weeks.

Too often, however, they remain unsupported.

“Having a space for young people who are going through things to be able to talk about it with their peers is very very important,” Van de Water said.

Rueben Jones, who works with young people impacted by gun violence in Philadelphia, has observed that other communities appear to make sure that students get grief counseling after being exposed to gun violence.

A new study finds eating a healthy breakfast -- together at home -- goes a long way to help your children's psychosocial health.

We already know that eating a healthy breakfast is important to help children's cognitive ...Read More

CHICAGO -- Justin Pearlman was settling into his latest rehab, a $95-a-day treatment center in Pennsylvania, when the Tribune reached him for an interview about his struggle with heroin addiction.

CHICAGO -- Taylor King held her 21-month-old son, Sterling King, as he napped underneath a tent in Chicago's Jackson Park on Saturday as she remembered what it was like to have to drive 40 minutes from her home on the ...Read More

FORT WORTH, Texas — Raymond Turner was at work when he got a notification from 23andMe that his DNA test results were ready.

CHICAGO -- When Serena Stoneberg walked down the aisle of a North Side church this month, her wedding continued a family tradition that spanned seven previous brides across three generations and multiple Chicago ...Read More

Rated PG-13 for some drug use, sexual references and language.

What it’s about: "Freaky Friday" meets "Old" — a young author with an old soul makes a wish to be her truest self and emerges as Diane ...Read More