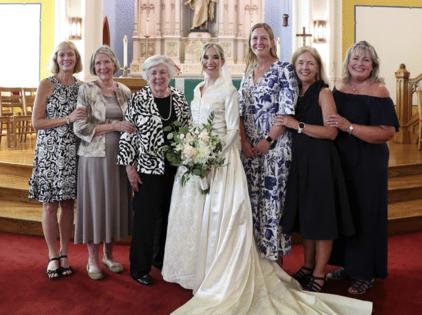 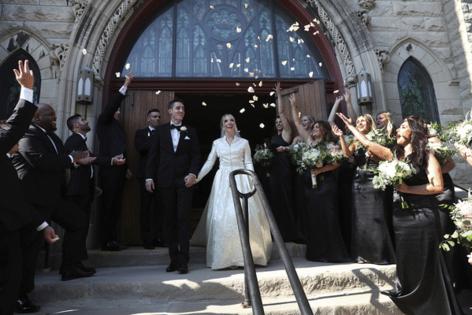 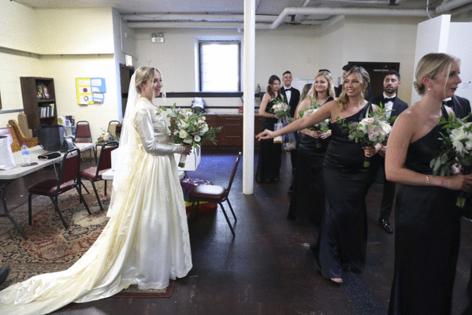 CHICAGO -- When Serena Stoneberg walked down the aisle of a North Side church this month, her wedding continued a family tradition that spanned seven previous brides across three generations and multiple Chicago neighborhoods and suburbs.

Stoneberg became the eighth bride to say her vows in the satin gown that was previously worn by her grandmother, great aunt, aunt and cousins on their wedding days. Her late grandmother purchased it for $100.75 at the Brides’ Room at the former Marshall Field’s on State Street and was the first bride to wear it in 1950.

The family heirloom has made seven more brides look good since then, with all but one of the weddings taking place in and around Chicago. Many of those brides gathered in Serena Stoneberg’s River North Hotel room the day before the wedding, to socialize.

“We never talked about it and said ‘well, you’ll wear the dress,’” Larson said. “It just sort of evolved.”

But over time, they said, the garment has taken on deep meaning as a connection to one another and to Chicago.

Larson’s daughter and the seventh bride, Julie Frank Mackey, 42, who got married in 2013 and was the last person to wear the dress before this month, said she never considered being married in anything else.

“You were going to make it work,” Mackey said. “Even when it didn’t fit me. It was really important just to be a part of that tradition. I just always knew from when I was a little girl that I would wear that dress.”

The dress is long-sleeved, with a high collar and floor-length train.

Serena Stoneberg, 27, added a few of her own flourishes for her ceremony. She wore her own shoes, her own jewelry and a new veil from her great aunt, the third woman to be married in the dress.

Rated PG-13 for some drug use, sexual references and language.

What it’s about: "Freaky Friday" meets "Old" — a young author with an old soul makes a wish to be her truest self and emerges as Diane ...Read More

WILDWOOD CREST, N.J. — Paul and Alethea Pawloski aren’t kidding when they describe the side-by-side motels their respective families have run for decades in the Crest as family resorts.

From two motels — the ...Read More

What it’s about: A group of teens host a raucous hurricane party at a secluded mansion, and after they ...Read More

When Sebastian Rios was a toddler, he hardly talked. “Don’t worry,” his pediatrician told Amparo and Victor Rios, Sebastian’s parents. Kids who grow up in households in which both Spanish and English are spoken are...Read More