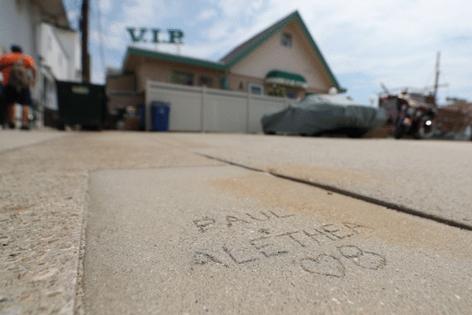 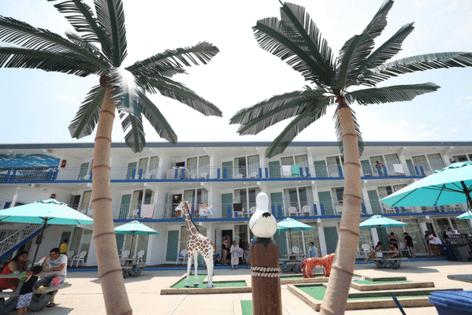 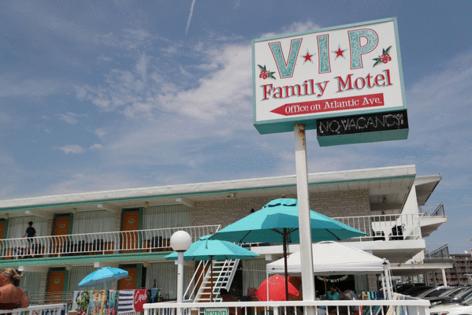 WILDWOOD CREST, N.J. — Paul and Alethea Pawloski aren’t kidding when they describe the side-by-side motels their respective families have run for decades in the Crest as family resorts.

From two motels — the Stefanide/Roy clan running things at the V.I.P. (Visitors in Paradise), the Pawlowskis in charge at the Compass — they created a new family.

For proof, there’s Juliana, the baby, born just days after Labor Day 2021, who’s now got the run of both places, their own Eloise in a Jersey Shore motel, living atop the Compass office, a daughter they call Little Miss 6500, as in the 6500 block of Atlantic Avenue, where both motels sit.

She’s heir to both thrones: queen of the concrete safari animals over at the Compass; captain of the wooden pirate ship over at the V.I.P.

Even the families that return every summer to the concrete and steel mid-century havens a block from the beach are beaming.

“That baby is absolutely beautiful,” says Luann Rogers, whose family fills eight rooms at the V.I.P., and has every summer since 1981. “And here’s Alethea — three generations running the same motel. I remember seeing her growing up, and her brother.”

In fact, Alethea, 34, is the fourth generation of the same family at the V.I.P., and Juliana will be the fifth. Alethea’s great-grandmother, Katherine Hammond Stefanide, and grandparents built the motel in 1964, opening in 1965. Back then it was beachfront, before an entire block, Ocean Avenue, was filled in and developed.

The families that run Jersey Shore motels are a tight-knit community, running on three months of shared adrenaline and crises, close with one another and close to their longtime guests.

“There are no secrets,” says Paul, 36. “Everybody has a website. We are the furthest thing from competitors. If we hear Imperial 500 is having an issue, we’ll go and give them a hand. We’ll share maids even if that’s what it takes to help out.”

What it’s about: A group of teens host a raucous hurricane party at a secluded mansion, and after they ...Read More

When Sebastian Rios was a toddler, he hardly talked. “Don’t worry,” his pediatrician told Amparo and Victor Rios, Sebastian’s parents. Kids who grow up in households in which both Spanish and English are spoken are...Read More

Zoe is the Greek word for "life," which is something that ...Read More