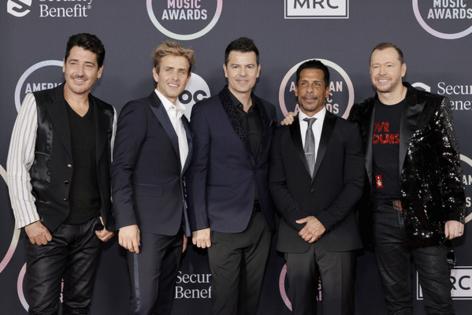 "Yeah we used to do matinees back then, too," says New Kid Donnie Wahlberg, who fondly recalls that chilly December day and meeting members of the Bad Boys, including Detroit Pistons coach Chuck Daly, and being pleasantly surprised that they weren't such bad guys after all (even though they'd disposed of Wahlberg's Boston Celtics in the Eastern Conference Finals the year prior).

It's now more than 30 years later and the Bad Boys are long gone and so is the Palace, but the New Kids are still hangin' tough. The Boston boy band has embarked on the latest iteration of their Mixtape Tour, this time featuring fellow '80s and '90s hit-makers Salt-N-Pepa, En Vogue and Rickroll king Rick Astley.

Playing arenas, then as in now, is a surreal feeling, Wahlberg says.

There's more time for reflection today as things move at a different pace than they used to for the New Kids.

The group — Wahlberg and Knight, along with Jonathan's younger brother Jordan, Danny Wood and Joey McIntyre — was a bona fide pop music sensation in the late '80s and early '90s. They crashed the charts with nine Top 10 singles between 1988 and 1990, three of which, "I'll Be Loving You (Forever)," "Hangin' Tough" and "Step by Step," went to No. 1. They almost single-handedly kept teenage magazines afloat, had their own trading cards and Saturday morning cartoon series, and their likenesses were plastered on everything from poseable dolls to pillow cases.

The burnout hit just as quickly, and the group split up in 1994, as the tides of the music industry changed and pop took a backseat to grunge. But after more than a decade apart, New Kids came back together in 2008, and have been reconnecting with fans ever since in ways they couldn't in the early days.

"When we were around the first time around, it was such mayhem that you really couldn't get close to fans. They would just rage — a happy rage," Wahlberg says.

With age, both for them and for fans, comes a better understanding of the performer-audience relationship as well as a management of expectations. Now the band members can safely go out into the crowd and even help themselves to a swig from a fan's beverage, as Wahlberg has been known to do, whereas before that would have meant being torn to shreds by rabid audience members.