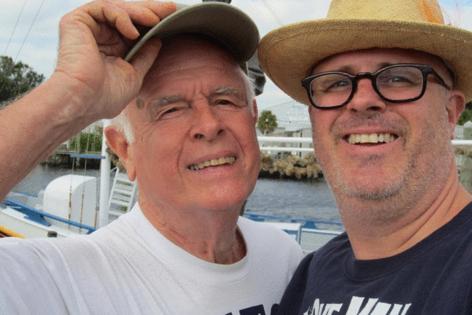 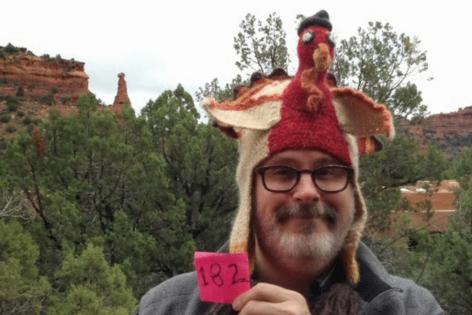 LOS ANGELES — Every Nov. 1, I engage in an unusual ritual. As soon as the Halloween decorations are down, I unleash a turkey on L.A. — and the world. Not a live bird but a gravy-colored knit chullo (a.k.a. an Andean ear-flap hat), crowned with a cartoonish-looking, Pilgrim-hat-wearing turkey, with flappy knit wings that bounce with my every step.

It's an absolutely ridiculous piece of headgear that I make a point of wearing out in the wild — driving to work, running errands, that sort of thing — as often as possible until the day after Thanksgiving. I started wearing it seven years ago to cheer up my father as he battled the metastatic melanoma that would claim his life not quite two weeks after Thanksgiving.

Despite the somber backstory, sporting the goofy lid is actually a joyful homage to my dad, whose sense of humor was well-known to those who frequented our family's Vermont country store. He seemed to be able to connect meaningfully with anyone who walked through the door, from toddlers to their retiree great-grandparents.

Wearing the turkey hat around L.A. somehow seems to forge a similar connection — ranging from the barely perceptible nod of acknowledgement from parking-lot attendants to "Hey, turkey man!" yelled from behind the counter of a Grand Central Market taqueria. From afar, I usually respond with a smile or a thumbs-up. In closer proximity, I'll lean in and whisper in a conspiratorial tone: "Did you notice the turkey on the hat is wearing a hat?"

I've always relished those interactions, but this year, the seventh season I've plopped the poultry on my pate and waddled out into the world like a punchline with no joke, those fleeting moments of feeling seen are even more meaningful, a way to truly, safely connect with strangers in an environment where social distancing is the norm and smiles are obscured by face masks. It's like a hug in a hat, a way of spreading holiday cheer in the run-up to a series of year-end holidays. That realization made me think fondly back to the circumstances that gave rise to the annual wearing o' the turkey lid — and my dad's role in it.

I impulsively bought the Peruvian-made hat in Sedona, Ariz., four days before Thanksgiving 2013.

I was taken partly by its comical look — eyes knit into a permanent expression of surprise, a black brimmed hat perched precariously upon its head, a knit wattle unfurling from just below its knit beak and a ridged crown of autumn-hued tail feathers splayed out behind like peacock plumage. As someone whose personal plumage had long flown the coop, I also knew the knit cap with its dangling pom-pommed earflaps would provide a measure of insulation against Sedona's surprisingly cool (at least at that time of year) climate.

While the hat certainly turned heads that first Thanksgiving, it wasn't imbued with much meaning. That came the next November, when I got the call from my family back East that I was needed to help take my dad, who had been diagnosed with melanoma, from Vermont to Boston for a consult at the Dana-Farber Cancer Institute. The turkey hat, which had just been sprung from storage along with the other Thanksgiving accoutrements (turkey-themed cocktail napkins and a DVD of "Planes, Trains and Automobiles"), found its way into my hastily packed bag, and off I went. It was with me when what was supposed to be a five-hour drive to Boston and back metastasized into an emergency gauntlet of MRIs, doctor visits and my father's totally unexpected two-week stay at Brigham & Women's Hospital.

It was during this time that the magic of the turkey hat slowly revealed itself to me. I wore it into and out of the hospital every day of those dark two weeks, knowing it would bring a smile to my dad's face. What I didn't expect was how it similarly affected the hospital staff and other patients I'd pass in the hallways or see in the elevators. My first "Hey, turkey man!" call-out came just a few days in when I walked by a hospital-gowned patient wheeling his IV stand down the hallway for a little exercise. I'd pass him in the hallway a half-dozen more times on that trip.

On each occasion, he'd break into a wide smile and flash me a thumbs-up with the hand that wasn't steadying his portable IV rig. Some days I'd plop it on my father's head as he was being wheeled down into the bowels of the hospital for one of the endless rounds of imaging. On those days, both he and the hospital staffer accompanying him would return grinning ear to ear. No one in our family would consider those two weeks anything but a terrifying emotional roller coaster, but damn if cramming that turkey-shaped pile of hand-knit acrylic atop my head didn't make it feel just a tiny bit less bleak for those of us coming to terms with my father's rapidly approaching death.

"We are a little bit on edge at this ...Read More

For many families, this Thanksgiving will represent a return to normalcy, thanks to COVID-19 vaccines.

But for some parents, the holiday presents yet another dilemma: Should they gather with friends and family, given that...Read More

In a sense, that’s true, albeit this mom’s definition of respect hardly lines up with that of said ...Read More

While the country is divided over COVID-19 vaccines — and Florida lawmakers plan to pass laws to undermine federal mandates — another ominous problem is going largely unnoticed: Routine immunizations for children, ...Read More