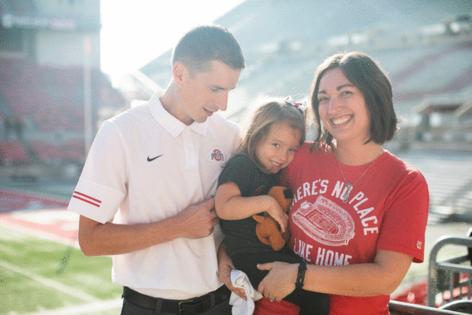 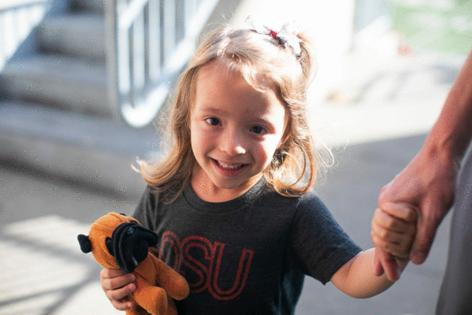 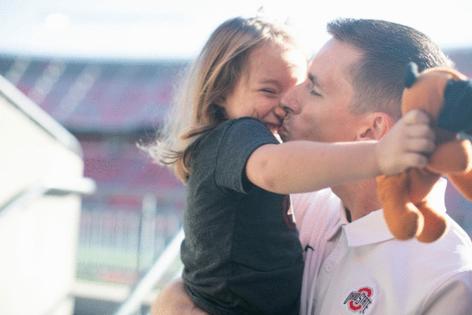 As he lines up to run in the Nationwide Children's Hospital Columbus Marathon on Sunday, Browning's running bib will have his race number, but instead of his name, it will simply say "Nora's Dad."

And at the 7-mile marker, there will be signs bearing his 3-year-old daughter's name as a Patient Champion. She's one of 24 spanning the 26.2 mile course, which will be filled with runners again this year after the 2020 marathon and 1/2 marathon were cancelled due to COVID-19 concerns.

Three years ago, the little girl who today loves reading, bike rides through her Northwest Side neighborhood, and dogs — including Carmen, her family's boxer — was born 10 weeks premature at OhioHealth Riverside Methodist Hospital.

She immediately was transferred to Nationwide Children's Hospital, where she spent 47 days in an incubator.

She weighed 2 pounds 11 ounces. On her seventh day of life, a nurse noticed she wasn't eating properly. Doctors said she'd need an emergency surgery to correct a malrotation of the bowel.

The procedure was successful, but a string of setbacks delayed her release.

Since then, Nora has made steady progress, and this May she officially "graduated" from the hospital's neonatal care unit, a formality requiring patients to maintain regular visits until they turn 3.

"We're very fortunate to have things come out the way they did for her. She's a beautiful child, she's developing great and we know that's not the case for a lot of the Patient Champions," Browning said.

RALEIGH, N.C. — With Pfizer officially requesting emergency use authorization from the Food and Drug Administration, the process has started for the company’s COVID-19 vaccine to be authorized for children ages 5 to 11...Read More

Rated PG-13 for sequences of violence and action, some disturbing images, brief strong language and some suggestive material.

What it’s about: Daniel Craig's final Bond movie is another globe-trotting,...Read More

Rated PG for macabre and rude humor, violence and language.

What it’s about: A sequel to the 2019 animated feature that updated the classic Addams Family cartoons for a new younger audience. This ...Read More