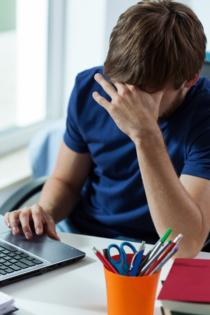 Q: Our 13-year-old eighth-grader says he doesn’t like the small private school he attends and wants us to put him in public high school next year. His grades are fine, he’s got several close friends, and he’s on the basketball and track teams, but he says that he’s bored and wants to attend a bigger school that offers more in the way of classes and activities. We are concerned because the high school he would attend has a reputation for being a risky environment. We’ve heard horror stories of previously good kids falling in with the wrong crowd, getting into drug use, and the like. In our estimation, our son is the sort who might cave to peer pressure. He assures us that we have nothing to worry about. What are your thoughts?

A: Well of course he assures you that you have nothing to worry about! As today’s young people are prone to remarking, “Duh!”

Do you think for a second that he’s going to respond to your concerns with, “You know, Mom and Dad, now that you mention it, I agree that I’m just the sort of young teenager who is likely to fall in with the wrong crowd and begin experimenting with various forms of juvenile delinquency. You guys are absolutely correct! I’d be much better off staying right where I am! Thank you for being the voices of reason in my life!”

No, he’s not. He’s going to promise, and with good intentions, that putting him in a viper pit is not going to result in a viper bite.

The fact remains, your son is not gifted with being able to tell the future and neither are you and neither am I. You and I are adults, however, and adults are far more adept than young teens when it comes to assessing possibilities and probabilities. In that regard, the possibility that your son will fall in with the wrong crowd in the public high school in question is a given. The actual probability of that may be less than, say, 20 percent, but 20 percent may be triple or even quadruple the chance of his becoming bit by a viper if he stays put.

I am reminded of the adage, “If it ain’t broke, don’t try to fix it.” In every respect, things are fine at the small private school. Right? Right! Therefore, I would recommend that you leave him there. If I were in your shoes, I would much rather my young teen son be bored (if that is truly the case) than tempted daily by the forces of evil.

The problem is that you have already stepped into quicksand by including your son in the discussion. I just hope you’re not the sort of wimpy parents who can’t bring themselves to make their children unhappy, who are forever negotiating and compromising with the emotion-driven terrorists-in-residence because if you take my recommendation, your son is going to be unhappy. For a while, that is. And then he will snap out of it and move on.

And then, brace yourselves for the storm of the century. But that, too, will pass.

Rated PG for macabre and rude humor, violence and language.

What it’s about: A sequel to the 2019 animated feature that updated the classic Addams Family cartoons for a new younger audience. This ...Read More