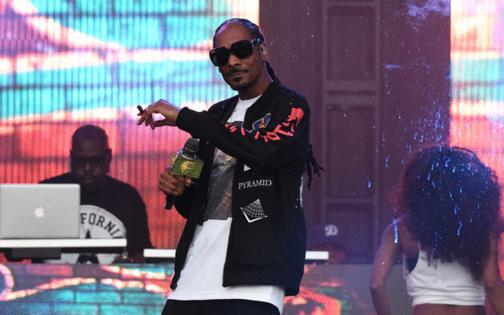 The Long Beach-bred rapper, who began his new role as the label’s executive creative and strategic consultant this year, announced the project Monday on “The Tonight Show Starring Jimmy Fallon,” along with plans for his own 19th studio album, “Algorithm.” (It’s unclear if “Algorithm” will be a Def Jam release.)

“I got a Def Jam kids album coming out this year too, something for the kids, so you, know. We thinking about those babies too,” Snoop said in a virtual appearance on NBC’s late-night show.

The album would be the latest kid-geared project Snoop is linked to: He also voices Cousin Itt in the animated “The Addams Family 2" film, out this Friday.

It’s also unclear if Snoop will be featured on the children’s album or if it’s a collaboration among the label’s other acts, which include. Def Jam counts Kanye West, Justin Bieber, Pusha T and Teyana Taylor. Reps for Def Jam did not immediately respond Tuesday to requests for more information.

“Algorithm,” Snoop’s next album, features “a lot of big-name acts” and is due in November, the 49-year-old said. It also marks the first time the Doggfather, born Calvin Cordozar Broadus Jr., has released two studio albums in the same calendar year. The weed aficionado dropped “From Tha Streets to Tha Suites” on April 20.

The gangsta-rap pioneer — whose hits include “Gin and Juice,” “Drop It Like It’s Hot” and “Who Am I? (What’s My Name?)” — is always evolving, amassing an impressive array of titles like corporate pitchman, tech mogul, TV personality, actor, Martha Stewart’s bestie, cannabis investor, football coach, DJ and gospel.

He told Fallon why joining Def Jam was a good move for him.

“Def Jam was the perfect place for me, considering how much I love it and how much it means to hip-hop and how it really needed somebody like me to change the energy of the building,” he said. “So I’m over there for one reason: to get the music back poppin’ and to make the people feel the like they’re supposed to feel.”