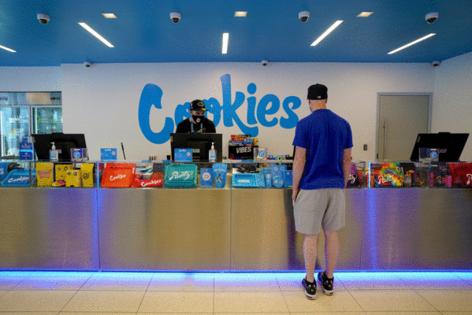 The chain, which operates stores in La Mesa and Mission Valley, got approval in June to open a third location in Sorrento Valley.

Before that approval, the San Diego Planning Commission and the Torrey Pines Community Planning Group said Cookies targets underage customers with its name and Sesame Street-style graphics that evoke the Cookie Monster character.

A company official said in an interview last week that the chain absolutely does not target underage, young people, explaining that the Cookies name is focused not on actual cookies but on matching customers with the right cannabis strain for them.

Similar to cookies being made in many varieties, company officials say, cannabis comes in many different strains and users need to find the strain that affects their body in the precise ways they want.

"There is a long legacy with the name Cookies," said Crystal Millican, vice president of retail for the 13-year-old chain based in northern California. "The whole experience has been tailored to the customer. We try to pair them one-on-one with a budtender as often as we can."

Local critics contend that the name, the font of the lettering and the light blue coloring used by Cookies are all attempts to market to children.

"I hate the name," said Planning Commissioner James Whalen, who voted to approve the new dispensary. "I think it's disingenuous to say it's not attractive to young people."

Millican said the company, which operates 40 dispensaries in multiple states, said it is virtually impossible to sell to minors, when California requires full-time security guards to check customers' identification at all dispensaries.