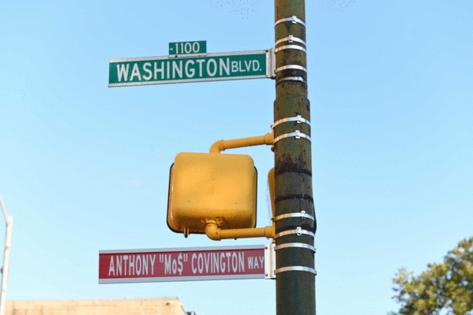 In the mornings, however, city crews clear out the bottles left to mark the spot where Covington was gunned down at age 27. Worse yet to his friends, crews removed a ceremonial street sign that declared this corner of Pigtown their own: “Anthony Mo$ Covington Way.”

That street sign brought attention recently: complaints from families who’ve sought to take back these corners from drug dealers, questions from news reporters, then swift action from City Hall. Opinions swirl around that little red sign: from a grieving woman who wants her brother’s name remembered to the families frustrated that the street could be dedicated to a young man with a rap sheet.

The sign revealed divisions of class and race in this changing Southwest Baltimore neighborhood.

From the crowd on the sidewalk, Covington’s friends let loose their frustrations.

“If it was a white boy killed,” one said, “they’d name a highway after him.”

No one volunteers a name here. It’s night, and the young men hang around on Washington Boulevard — not up by the brewery and farm-to-table cafe, but a block west at Bob’s Bar and the corner mart where the Pigtown resurgence peters out. It happened right here, a Saturday night in March 2020, when gunmen shot up the block.

The bullets caught Covington in his back. Rod Knight, who’s been around these streets for decades, bent down and gently rolled him. Knight remains shaken by the memory; Covington threw up blood.

“That boy got killed for nothing,” Knight says. “If people who love him can’t honor him, that’s crazy. A dignitary dies and you pull down your flags at half-staff.”