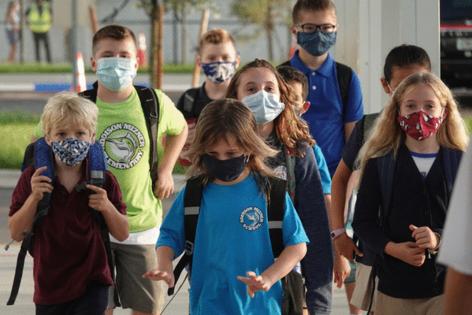 The kids say they don’t understand the commotion.

“I forget it’s on my face,” said Joel Bender, 13, an eighth grader at Indian Ridge Middle School in Davie. “Everyone’s wearing it. If it slides off, they put it back on. It’s stupid to protest.”

Jerry O’Donnell, a science teacher at Eagles Landing Middle School west of Boca Raton, agreed that the kids are doing fine: He has had “100% compliance” with mask wearing this year.

“They see us wearing it, so they wear it,” O’Donnell said.

According to a recent Gallup poll, 57% of parents of K-12 children favor mask mandates for unvaccinated students. The American Academy of Pediatrics supports universal masking for everyone, vaccinated and unvaccinated, in schools.

“It’s a little bit uncomfortable, but I see it as a small price to pay,” said Gabriela Carvajal, a senior at Everglades High in Miramar. “The vast majority are complying. It’s like a collective agreement to keep each other safe.”

Still, masks have become an enormous point of contention, especially in Florida, where Gov. Ron DeSantis is fighting 10 school districts, including Broward, Palm Beach and Miami-Dade, over their mask requirements. DeSantis signed an order July 30 that said parents should have a choice about whether their children wear face coverings at school.

A vocal contingent continues to voice displeasure with South Florida schools’ decision to defy the governor. Karen Ammar, mother of a sixth grader who attends Beachside Montessori Village in Hollywood, opposes mandatory masking but said she did not try to opt out her son because “he has been indoctrinated to believe that he is hurting others when not wearing a mask.”