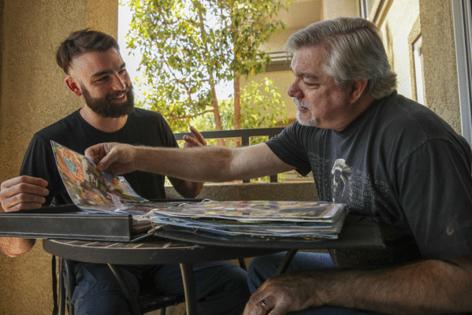 So many of Arriaga's defining memories had built toward this message. There was the time, around third grade, when a cousin blurted that Arriaga wasn't truly part of their family. The strained follow-up conversations with his mother. His recent gamble in mailing a sample of saliva to Ancestry.com.

In launching his search, Arriaga, 29, was trying to sort out truth from family folklore, attempting to verify or disprove a story about his paternity — a story that had filled him with anger and shame for years. Would a DNA match lead him to a dead man or a felon, or perhaps to a friendly face whose features he'd recognize as his own? Or would he find anyone at all?

But now, in the evening stillness of his Riverside, California home, Arriaga stared down at a man's profile picture on Facebook and worried that the message he was about to send would blow up his life.

"I've done a great deal of research," he wrote, "and I think you might be my biological father."

Arriaga's high-stakes quest offered the potential to enrich or devastate — and certainly alter — the lives of several people involved.

His inspiration grew out of a clarifying conversation with his English-professor-turned-mentor, in whom he'd confided the complicated story of his birth — a tale he had begun to question. The two often dissected the work of American philosopher William James, discussing how the narrative surrounding something shapes the way we see it, how revising a story can change how it affects us.

There was a key narrative Arriaga needed to sort out — his own — so with encouragement and investigative help from his wife, he launched the months-long process that would shift the dynamics of two families and ultimately free him from a heaviness that had shaped his life.

One in four pregnancies end in miscarriage, according to the World Health Organization. But while there are cultural scripts for responding to pregnancy and birth, there isn't one for miscarriage. Instead, families facing ...Read More