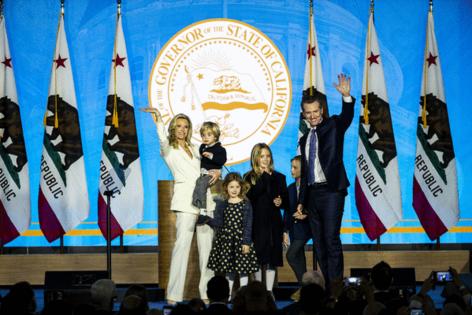 The photo began circulating on social Monday and quickly drew criticism from parents who oppose the state’s requirement that children wear masks in schools. Under the state’s guidelines, children’s camps must follow the same rules as schools.

Newsom has drawn criticism this month for releasing a policy requiring kids to wear masks in schools even if they are vaccinated, an issue Republican candidates trying to replace him in an upcoming recall election have seized on.

Newsom spokeswoman Erin Mellon said the camp two of his children attended sent an email saying it would not enforce masking guidance, but that they missed it.

“The Newsoms were concerned to see unvaccinated children unmasked indoors at a camp their children began attending yesterday,” Newsom spokeswoman Erin Mellon wrote in a statement Tuesday. “The family reviewed communication from the camp and realized that an email was missed saying the camp would not enforce masking guidance. Their kids will no longer be attending this camp.”

Jonathan Zachreson, who leads the advocacy group Reopen California Schools, posted about the photos of Newsom’s son on his group’s Twitter account. The group is one of two parent advocacy groups that are suing the Newsom administration over its rules for masks in schools.

Zachreson’s group pushed for months for California schools to reopen more quickly, and is now advocating for relaxed restrictions in schools.

The group argues masks should be voluntary for students and teachers and quarantine rules should be relaxed so kids aren’t kept out of school even if they don’t have symptoms just because of a COVID-19 exposure. The group also opposes routine testing for students.

Zachreson said he thinks the incident shows Newsom is a hypocrite. He compared the situation to the French Laundry party Newsom attended last year, where Newsom was photographed gathering with other families at the Napa County restaurant without a mask, even as he told Californians they couldn’t do that.

“This clearly demonstrates that he doesn’t believe there’s a risk,” Zachreson said. “His kids get to live by a different set of rules.”

Zachreson said he doesn’t believe Newsom didn’t know that the camp allowed kids to interact without masks inside because the camp frequently posts photos of maskless children on its website and social media accounts.

I have been lied to by so many contractors, I would be surprised if there weren’t an internet course on how to swindle your customers. Arguments, yelling, threats and just plain meanness over a few bucks makes me sick. ...Read More

I got this text from a client last week saying, “I really want to solve this issue of men mentioning their exes! Or maybe that’s just normal? Does that happen to other clients on every first date?”

And then this ...Read More

Most suicides do not take place at the winter holidays, like most people think, but happen toward the end of July and in August. At this time of year, being aware of how the people we love are feeling is even more ...Read More

You like someone. They like you… maybe. You continue liking this person. This person stops liking you (or never did) and pulls back. You like this person more. This person, feeling smothered, continues to pull back. You ...Read More

It has been a very hard year. Hard because of the pandemic, the election, and the protests, and hard because some people are behaving more aggressively — a trickle-down effect from politicians to plumbers. In part this ...Read More