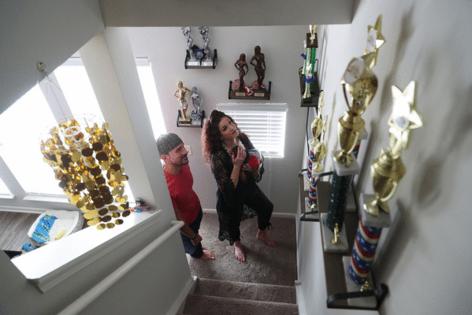 The Naperville, Illinois, spouses will be competing in this weekend’s Nathan’s Famous Fourth of July International Hot Dog Eating Contest, a nationally televised event that will welcome 28 competitors to Coney Island on Sunday.

The two met in 2017 at this same event. He had noticed her social media posts; they had briefly chatted through Instagram. But it wasn’t until he was at the gym in the weight area with other competitors that they met in person. She came in with her red hair blazing, he remembers.

“My impression of her was that she’s a loudmouth, just like me, and has a big personality,” Juan said. “We show it in different ways. I think that’s what attracted me to her.”

All she knew of him was a boisterous onstage persona — he wears tights with pictures of himself, shakes his butt and entertains the crowd.

“He steals the show,” she said. “It turns out underneath all of that clout, that was just a character. Underneath is a very, very, very, good, loving man who is my best friend.”

One night, they ended up at a bar the group had rented out — the eaters consider it like their Oscars party — and began talking. He walked her back to the hotel, where they had their first kiss.

“That first hug, that first kiss, pretty much changed both of our lives,” she said.

From there, they began a long-distance relationship. He was living in Illinois; she was in Seattle. They tried to see each other at least once a month, flying back and forth, spending time downtown walking Michigan Avenue. Meanwhile, they grew their own careers; he is a personal trainer and model, she is a bodybuilder and fitness and nutritional coach through her company Whatever It Takes Health.

Her first contest was chowing down Peeps, 67 in 5 minutes. “I would smoke that now,” she said.