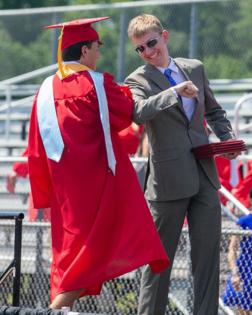 So far in their young lives, the Heinrich brothers of Manchester, Connecticut, have shared two powerful moments.

The second milestone happened Saturday at Manchester High School’s graduation ceremony, which Paxton Heinrich might have missed if not for his brother, Campfield.

As a board of education member (the youngest member elected in the board’s history), Campfield Heinrich, 20, was on stage helping to hand out diplomas. As his brother, Paxton, 18, approached, a vice principal turned to Campfield and asked, “Would you like to do this one?”

“It’s a moment that I think we’ll always remember,” Campfield Heinrich said. “It meant more after the fact than in the moment when I was caught off guard.”

The first, even more memorable incident happened in February 2012, when then 11-year-old Campfield was eating dinner with his younger brother and their mother, Anne Heinrich. The boys’ father was away on business at the time.

Eight-year-old Paxton started coughing, then stopped suddenly. His face turned bright red. A chunk of hamburger had corked the boy’s airway and he couldn’t breathe, Anne Heinrich told a Courant reporter at the time.

She didn’t know the Heimlich Maneuver and acknowledged being a bit frantic watching her younger son pointing at his own head and struggling for air. Campfield immediately walked behind his brother and started upper abdominal thrusts while telling his brother to stand. Paxton didn’t listen at first, so Campfield told him again.

“He had to shout over me,” Anne Heinrich said. “I was screaming a little bit.”

Paxton finally stood and his brother continued the maneuver until the offending piece of burger dropped from the boy’s mouth. For his quick and calm response to a life-threatening situation, Boy Scouts of America district leaders presented the organization’s Heroism Award to Campfield, who had learned the life-saving maneuver in the Scouts.

Paxton is headed to the University of Hartford in the fall. Campfield, who graduated from Howell Cheney Technical High School in Manchester in 2018, just finished his junior year at Unity College of Maine, where he has been studying environmental justice and social change.

Campfield announced Wednesday in a press release from town Democrats that he will not be running for re-election to the school board in the fall due to the demands of his studies.