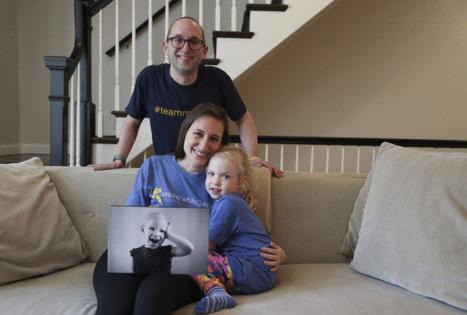 They had a wonderful Chicago doctor who talked them through a path forward. But Maddie’s treatment plan was based on scant data, as her rare childhood cancer could not lean on research and data more typically available for adult cancers. And most medications for her little body, her parents recalled, were designed for adults.

“You get an ordinary type of breast cancer, and you’re going to get your printed treatment protocol, and you’re going to know the outcomes and the likelihood of success,” he said. “When you’re dealing with a rare pediatric cancer, you know nothing other than it is either success or failure.”

Many may assume plenty of funding exists for a cause as devastating as children’s cancer. But despite being the No. 1 cause of death for disease for kids and adolescents, funding for kids makes up just 4% of federal annual cancer funding, advocates for cancer research say. Some childhood cancers have seen limited progress for decades.

All this leaves children and their families fighting cancers that aren’t well understood in children and with therapies designed for adults.

“We need more treatments that are dedicated to childhood cancer,” said Aubrey Reichard-Eline, director of corporate and community engagement at the American Childhood Cancer Organization.

According to the National Institutes of Health, funding for research is hampered because pharmaceutical companies typically develop drugs for cancers that affect adults. This leaves children with few treatment options developed for them, and taking medicines originally created to treat much larger bodies than theirs.

“And on top of it, they’re super toxic,” Scott Kramer said. “It really is a lifetime of treatment, care and monitoring because of the effect of these drugs, and the inability to make progress in finding treatments that are not harmful.”

Reichard-Eline noted that only three new drugs have been approved specifically to treat childhood cancers in the last 20 years. In that same time frame, she said, 194 cancer drugs were approved for adults.

Her daughter was 9 when diagnosed with brain cancer in 2018. Now 12, chemotherapy helped her tumors recede, but because of the treatment she will have lifelong thyroid issues.

The American Childhood Cancer Organization notes that adult treatments are not ideal for children, because the immune system of a child is not strong enough for the side effects intended for an adult.

Even when children survive, they can face long-term side effects. According to the National Pediatric Cancer Foundation, more than 95% of childhood cancer survivors have treatment-related issues including chronic health problems, secondary cancers, cognitive impairments or a shortened life span.

To help children, according to the NIH, “Clearly, more research is needed to develop new, more effective, and safer treatments for childhood cancer.”

Challenges to securing research for childhood cancers include that they are relatively uncommon, representing less than 1% of new cases of cancer in the U.S. each year, and pediatric patients are treated at many different places across the country. So research requires not only funding but also proactive collaboration, sharing things like clinical outcomes.

Philanthropy remains a main driver of research, so parents’ hope for their children’s survival often remains in the hands of others’ generosity, rather than federal grants or pharmaceutical development.

Unlike adult cancers, most childhood cancers are from unknown causes; some may link to genetic abnormalities or radiation exposure, for example, but identifying causes is difficult. That means finding ways to prevent them also remains elusive.

And the pandemic only exacerbated challenges, Reichard-Eline said. Research labs have had to change protocols for pandemic precautions; families are even more cautious with a child in treatment, all while visiting policies are limited and their ability to meet and bond with other cancer patients has been restricted.

After their daughter’s death, the Kramers created Dancing While Cancering, which partners with 20 hospitals to deliver backpacks filled with gifts like maracas and wall decals intended to help tiny patients smile. The Lakeview couple, who has a 4-year-old daughter, Maddie’s sister, continues to speak out about better understanding childhood cancer.

“Every parent and caretaker with kids fighting this battle knows the pain, the anguish, the confusion,” Pammy Kramer said. “No one deserves to go through that.”