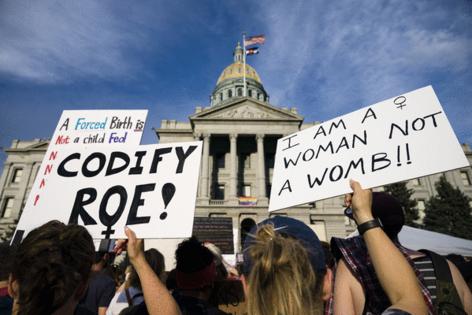 DENVER -- Abortion advocates want Coloradans moved to action by the U.S. Supreme Court’s decision to overturn of Roe v. Wade to know there are many ways to help in the fight for women’s reproductive rights, but some options could do more harm than good.

Employees with Cobalt, a Colorado-based nonprofit organization focused on bridging access to reproductive health care, advised on the best — as well as potentially harmful — ways people can get involved in fighting for safe access to abortions, which remain legal in Colorado after the legislature enshrined the right to an abortion in state law.

Colorado is surrounded by states restricting or banning abortions, making it a popular destination for people seeking the procedure legally.

In the aftermath of such restrictions, social media posts have popped up in which people use the word “camping” as a euphemism for abortion and welcome “campers” to Colorado. Posts use language such as, “I live in Colorado, where camping is legal. If anybody wants to come camping here, I have room available and can take care of you.”

National and local resources for abortion seekers or those looking to get involved in reproductive rights:

“It’s not safe to put those posts on the internet,” said Jaki Lawrence, strategic communications director at Cobalt.

In addition to further stigmatizing the word “abortion” by refusing to call the medical procedure by its name, Lawrence said people using such euphemisms put themselves and people seeking abortions at risk by blasting out their intentions in a public forum.

It’s not yet clear how other states plan to legally enforce their restrictions, advocates said. Others worry about laws in Texas and Oklahoma that allow individual citizens to sue anyone who “aids or abets” an abortion.

“However well-intentioned, you’ve now broadcast yourself as willing to aid and abet an abortion and made yourself and those you associate with — your family, your friends, those you want to help — a target,” Lawrence said. “This is why abortion funds are so important. We’ve been doing this work for a long, long time. Don’t contact a random stranger about getting help for an abortion. That’s what an abortion fund is for. There’s a reason some of this information is quiet. It’s safer.”

In addition to avoiding the “camping” language, Lawrence said it’s best to avoid narratives around starting “an Underground Railroad” for abortion care.

“There is nothing underground about providing abortion care,” Lawrence said. “The Underground Railroad was created explicitly for the purpose of liberating Black people from slavery, so we should not be co-opting that term for something that is definitely not underground and that was intentional for Black liberation.”

Instead, Cobalt president Karen Middleton said donating to local or state abortion funds gives money to the people who are best equipped to handle the situation and have been doing so for years.

“As somebody who has fielded a lot of volunteer requests, those can clog up our phone lines and we are trying to assist clients both financially and with travel support, so really channeling that energy to sustaining contributions to this work so we can continue to do is the way to go,” said Amanda Carlson, Cobalt’s abortion fund director.

The number of people calling and emailing Cobalt seeking funds or help getting an abortion has tripled since Friday’s ruling, Carlson said.

Prior to Texas passing among the strictest abortion restrictions in the country last fall, Carlson said Cobalt’s funds for practical supports for abortion seekers would go toward a grocery delivery here and there for someone who traveled to Colorado to have an abortion. Since its passage, Carlson said Cobalt has spent $43,000 on practical supports — flights, hotels, child care costs, gas reimbursements, meals — with $16,000 of that being in the past couple months.

Laura Chapin, Cobalt communications consultant, said another way to help is for people to share their own abortion stories with friends and family or share why the issue matters to you.

“Sharing this commonality of experience is just so important, and it absolutely affects policy,” Chapin said. “When people understand that this is health care and that they know people who have had one and literally every person’s situation is different, that really is the persuasion time period we’re in right now.”

“I was tired of seeing other women not ...Read More

Doctors are urging Florida parents to get the COVID-19 vaccine for their babies, toddlers and preschoolers.

The Centers for Disease Control and Prevention earlier this month recommended child-sized Pfizer-BioNTech and ...Read More

CHICAGO -- Within a week’s time the Supreme Court has overturned Roe v. Wade and ruled that law enforcement officers can’t be sued when they violate the rights of criminal suspects by failing to provide the familiar ...Read More

I am not a Karen.

I am not just a withered-up prune.

I am a sun goddess.

I am not an empty-brained senior woman with nothing to say.

I am a treasure trove of wisdom and experience, a keeper of ...Read More

I witnessed the Boston Tea Party, the Battle at Concord and Paul Revere's Ride.

You didn't think I was that old, did you?

I was a kid at the time, living in a Kansas City, Missouri neighborhood that went all out for the ...Read More

PHILADELPHIA -- Her baby was dead.

There was nothing she could do to change that heart-shattering fact.

But then she learned of a way that other women have found to ease the pain, to add meaning to an unthinkable tragedy...Read More