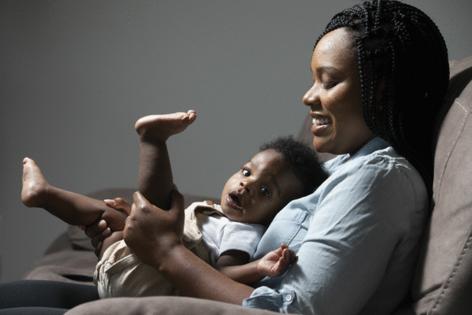 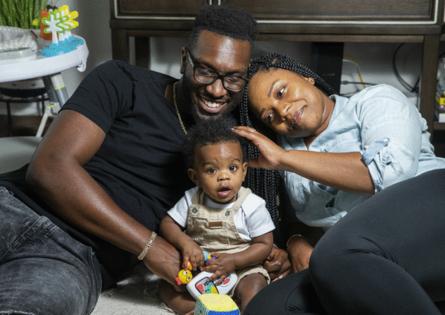 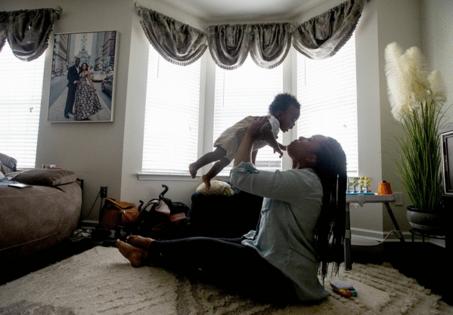 Her doula looked for the nearest nurse and, for at least the third time, said, "I need you to write this down: She has a headache."

A persistent headache during labor or pregnancy can be a sign of pre-eclampsia, a potentially deadly high blood pressure condition.

Hospital staff brushed off the pain as typical, so Jenkins pushed through.

Hours later, resting with her newborn son in her arms, Jenkins still wasn't feeling well. In addition to her headache, she was dizzy, her vision was unfocused, and her ankles were swollen. All normal after birth, the nurses assured her, and sent her on her way.

But within 24 hours of settling in at their home, Jenkins' legs were so swollen she could hardly walk, she was out of breath, and her head felt like it might explode from the pressure.

"I just remember crying in pain," Jenkins recalled. "I felt so bad and I couldn't figure out why."

That evening her husband, Kevin Jenkins, rushed her to the doctor's office with days-old Kairo in tow.

Jenkins and her husband, a social epidemiologist who advises hospitals on diversity and equity issues, were all too familiar with the statistics they were facing as new parents. As a Black woman, Jenkins was four times as likely as her white peers to die of pregnancy-related causes. She had greater odds of receiving less pain medication and otherwise having her medical concerns ignored by doctors. And she was nearly twice as likely to develop pre-eclampsia, compared with white women.

These health disparities are complex and there is no single cause. But reams of research show that institutional racism and unconscious bias among doctors contribute to a disparity that persists across education strata and class lines.

"I went in with an open mind. I didn't have a lot of fears," Jenkins said. "I didn't think that would happen at all."

Jenkins was treated for postpartum pre-eclampsia. She survived, but her experience underscores the complexity of addressing maternal mortality and morbidity.

Lawmakers and health administrators have focused in recent years on reducing deaths due to preventable medical complications that occur during pregnancy or while people are still being monitored at a hospital.

But data released by the U.S. Centers for Disease Control and Prevention earlier this year show this isn't enough: Maternal mortality continued to rise between 2018 and 2020, and the gap between Black and white patients widened.

Local data show that while hospital improvements have stemmed some deaths, a large share of deaths among new parents occur in the weeks and months after giving birth, when medical attention has shifted to the newborn. In Philadelphia, where the maternal mortality rate exceeds the national average, more than half of the 110 pregnancy-associated deaths between 2013 and 2018 occurred at least six weeks after birth.

Racial inequity, poverty, and lack of access to health services all contribute to maternal mortality in the year after birth. Addressing what happens to a family when they leave the hospital is the only way to keep fewer mothers from dying, public health leaders say.

"The societal impact of mothers dying is important and deep. They're leaving families and children behind. The generational impact of that is immense," said Aasta Mehta, the medical officer for women's health at the Philadelphia Department of Public Health and a chair of the city's maternal mortality review committee.

Efforts to make childbirth safer so far have focused on policy changes that target deaths linked to medical conditions that could be avoided if detected earlier.

Hospitals working with the Joint Commission, the largest hospital-accrediting organization, must evaluate a patient for risk of excessive blood loss, or hemorrhage, if they've received at least four pints of blood, and retrain staff on measuring blood pressure to detect signs of pre-eclampsia.

Now all hospitals — even those without birth units — must train emergency department staff on how to respond to pre-eclampsia.

"These two are low-hanging fruit because we know they're big issues and the most preventable," said Jennifer Anderson, who leads the department of standards and survey methods at the Joint Commission.

The Joint Commission initiative, which took effect in January 2021, is too new to have shown results yet. Hemorrhage has been declining nationally, but remains a leading cause of pregnancy-related death, accounting for 11% of such deaths, according to a 2020 report by the Commonwealth Fund based on U.S. Centers for Disease Control and Prevention data.

But Philadelphia has found success with similar hemorrhage prevention protocol. About 7% of pregnancy-related deaths in Philadelphia were due to hemorrhage between 2013 and 2018, according to the most recent report from Philadelphia's maternal mortality committee.

Philadelphia's Maternal Mortality Review Committee — the nation's only city-based board reviewing maternal deaths — has made progress in better understanding what contributes to maternal mortality, and connecting traditional providers, like hospitals, to community-based organizations.

Hospitals can reduce deaths from preventable causes, such as hemorrhage, which typically occurs before discharge, but they alone cannot eliminate the maternal mortality rate.

"Maternal mortality is a complicated issue, you can't point the finger at one place," Mehta said.

About a quarter of pregnancy-related deaths in Philadelphia between 2013 and 2018 occurred between six weeks and a year after birth, according to the city's maternal mortality review committee report.

For too many Black women, pregnancy is fatal. Temple thinks these birth workers could help.

The American College of Obstetricians and Gynecologists recommends that people see their doctor within three weeks of giving birth, and sooner if they experienced high blood pressure. But many don't see their doctor until six weeks after birth — the old standard for the first postpartum checkup, when patients who did not have complications during birth are typically considered physically healed and doctors clear them to resume regular activity. Up to 40% of people never have a postpartum doctor's visit, according to the ACOG.

Cost, access, and lack of trust contribute to delayed care.

Until earlier this year, people eligible for Medicaid during pregnancy lost the government-funded health-care coverage six weeks after their baby was born — leaving many without access to affordable care while still recovering.

Pennsylvania recently started allowing people to remain covered by Medicaid for a full year after their baby's birth.

Even those who are able to pay for care may not be able to access it because of inadequate transportation, or if appointments are only available during the workday. Finding childcare for a newborn was a challenge for new parents during the pandemic, when doctor's offices required patients to come alone.

In prenatal visits, patients often spend only a few minutes with their doctors, with appointments focused on checking vital signs. It falls on the patients to raise any concerns. Doctors can build trust with patients by asking more questions themselves, especially about how patients are feeling about their pregnancy and their fears about birth, said Lacey Morgan, owner of King of Prussia Doulas and Jenkins' doula.

She has found that connecting patients with others at a similar stage of pregnancy is another way doctors can garner trust with their patients.

"The act of creating community during pregnancy is paramount — giving women a support network, then allowing the provider to be part of the conversation," she said.

Outside Philadelphia, the Foundation for Delaware County launched a fatherhood program to respond to a void in emotional support and parenting education geared toward new dads. The organization provides housing support and nutrition counseling and can connect families with other safety net programs, such as Medicaid and the food and nutrition program for low-income families known as WIC.

"We can draw that stuff out of the way, so they can focus on going to prenatal care, or making sure they learn more about nutrition and how best to feed their young child," said Joanne Craig, the foundation's chief impact officer.

Jenkins, the new mother from Drexel Hill, thinks a lot about what will happen if she decides to have another baby, and whether the outcome will be different.

When her son was just days old, Jenkins was readmitted to the hospital until doctors could bring down her blood pressure. Her husband brought Kairo to visit daily, so that Jenkins could hold him against her chest and bond.

Kairo is now 9 months old, and both he and Keisha are healthy. But thinking about the day he was born doesn't bring her as much joy as it should.

"When I was going through it as a new mom who just gave birth, I was so focused on my baby that I didn't even process how horrid an experience it was," she said. Looking back, she can appreciate "how risky it was and how at risk it put us."

DENVER -- When Kyra Solomon, who just finished her first year of teaching, moved to Colorado, she noticed there weren’t many Black teachers.

“One thing I’ve kind of been missing since I’ve been to Denver is not ...Read More

I have found that one of the best ways to refurbish aging kitchen goods is to attend a pitch-in dinner. I have just returned from a large family gathering to which I took a spinach salad and came home with baked beans, ...Read More