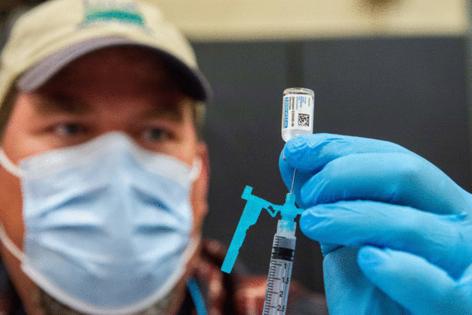 They are less likely to see the doctor. They eat fewer fruits and vegetables. They're more likely to smoke, die in alcohol-related crashes, and engage in other activities that can lead to traumatic brain injury. By nearly every measure known, men fall short of women when it comes to taking care of themselves.

And for months now, to the surprise of few in the medical profession, men consistently have lagged behind women in getting a COVID-19 vaccine. As of mid-November, 57% of men and boys in the U.S. were fully vaccinated, compared with 61% of women and girls.

The male reluctance to seek medical care is so well-documented, and so exhaustively talked about, that it's become a punch line. And that can make solutions difficult, said James Leone, a health professor at Bridgewater State University in Massachusetts.

"The reason men often live sicker and die sooner is we allow it," he said. "As a society, we don't go beyond the surface levels, and just say, 'Oh, that's a shame. What's wrong with guys?'"

But there's nothing funny about men living sicker and dying sooner than women — especially when the decisions they make about their health can have medical and economic ramifications for their families, as has become apparent during the COVID-19 pandemic. More than 40,000 children have lost a parent to COVID-19, and many more have experienced food or housing insecurity after their parents lost jobs or were unable to work.

So what's going on with men and their health?

Doctors, psychologists, evolutionary theorists seem to agree that it all comes down to men having a higher tolerance for risk. But untangling the cause is complicated. Some researchers think the trait is a genetic holdover from ancient times, when men who engaged in aggressive, risk-taking behavior could out-compete their peers for mates and food. Others say men's higher risk tolerance is primarily a learned quality, fostered by social and cultural norms of masculinity.

Although women can be risk-takers, too, on average, the difference is undeniable, said Daniel J. Kruger, an evolutionary psychologist at the University of Michigan's Institute for Social Research. Whatever combination of nature and nurture is at work, these characteristics have become deeply etched into our society over centuries. Public health campaigns are exploring new ways to get their messages to resonate with men, but changing such ingrained behavior will take considerable and concerted effort.

"This goes way back in our evolutionary history," he said. "It doesn't determine our behavior, but it certainly influences it."

During the pandemic, the male-female divide was put on stark display.

Since 2018, researchers at Indiana University in Bloomington have been conducting a long-term study of 250 opposite-sex couples, surveying them about a series of what Jessica Calarco, an associate sociology professor at Indiana University, called "fraught topics" for new parents — among them breastfeeding, childhood vaccines, co-sleeping, and at what point either partner goes back to work.

When COVID-19 hit, Calarco and her colleagues added pandemic-themed topics to the mix.

Among the key findings: Two-thirds of couples disagreed about what level of risk was acceptable for their family. In most cases when the man and woman disagreed, it was the woman who was more risk-averse and adhered more diligently to safety guidelines, such as wearing masks and maintaining social distance.

"Because women were the ones taking the more risk-averse positions, they were also the ones pressured to be the peacekeepers when this did turn into conflict," Calarco said. "Women felt responsibility for fixing the conflict, or preventing it from escalating."

They did that by taking on the burden of ensuring the family's safety themselves — and in many cases taking extra precautions to protect children or elderly relatives from their spouse's riskier behavior, she said.

"This isn't a function of biological differences but the pressures put on women to be caregivers, to think about themselves and everyone else around them," Calarco said. "Being pushed into that worrier role in their families or communities makes them more aware of risk than men."

In other words, women make decisions — including health decisions — based on what they think is best for themselves and everyone else they care for, which ultimately leads to more conservative choices. Men more often base decisions on their personal risk tolerance alone, which leads to riskier choices, Calarco said.

"It's kind of a self-fulfilling prophecy," he said. "Men and boys are going to do things that are bad for their health and we just kind of accept that as part of our culture. It's almost like we give the social free pass to men and boys to just take off, and come to us when you have an issue."

Cultural norms aside, biology ultimately sets the stage, said Michigan's Kruger. While the differences between males and females are not black-and-white, studies nevertheless have suggested that genetic predisposition plays a role in their varying penchants for risk.

The phenomenon dates back to our ancestors of ages ago, when men had to compete for partners in a way women didn't. Most women had children, but only the strongest men had partners. They used their physical strength to establish powerful leadership positions within their communities, and prevent other men from pairing up, he said.

"There was a lot of incentive for competition, to get in those high-status, powerful positions where you can attract and retain mates," Kruger said. "There's a risk you'll die without reproducing and a greater motivation to take risks to get there."

Our physical and social environments have, of course, changed dramatically. No one back then was scheduling doctors' appointments or getting vaccines, and no modern American man's survival depends on his ability to physically fend off competitors and hunt down large animals for dinner. But mindset borne of that genetic legacy, he said, is still there.

When public health officials have sought to encourage public acceptance of vaccines, masks, and other pandemic safeguards, few if any of the messaging initiatives have been crafted with gender in mind.

But evidence from other health contexts shows it is possible to get men to be more health conscious, said Leone, who studies methods for improving health outcomes in under-served communities.

One possibility is terminology.

The term "women's health" is often tied up with the issues surrounding reproductive health and the health of offspring, whereas "men's health," to the extent that it gets any lip service, is off in its own silo. The more inclusive term "family health" would send a message to men that they, too, must take care of themselves, Leone said.

But how to get the message across? It may sound simple, Leone said, but just getting men in the same room, talking about health topics that they may in the past have shied away from, can help.

In Australia, for example, men are encouraged to join community organizations called "sheds," where they discuss healthy behaviors while partaking in such activities as woodworking and beekeeping.

In the U.S., some health care providers have demonstrated success by meeting men where they are, such as barbershops or sporting events, Leone said. Blood pressure screenings at football games and car shows are increasingly common in many states, for example. Or community breakfasts paired with cancer screenings, with catchy names such as Pancakes & Prostates.

A big part of the strategy is simply getting men to form new habits, Leone said.

Girls are taught to be proactive about their health, and as young women are encouraged to schedule routine gynecological exams. Young men, meanwhile, may have very little reason to see a doctor, so long as they're healthy, he said. But if they establish a relationship with a trusted health care provider, men can get started on lifestyle changes that can reduce the risk of chronic disease years into the future.

Modeling behavior and social influence also can be powerful in shaping health behavior, said Indiana's Calarco — especially for men, who may be less threatened by exposing what they perceive as a weakness if someone else is doing the same.

For instance, research has found that when male executives do not take advantage of their company's parental leave policy, neither do new fathers lower in the organization.

"The more other people are doing it, the more you're inclined to do it," she said. "When you have high-status men engaging in a behavior, it can send a signal that it's OK for other men to engage in that behavior, too."

Will any of this work with the highly politicized topic of COVID-19? Hard to say, though vaccine mandates may render the question, in many cases, moot.

What's clear is that men and women are often of different minds when it comes to taking care of themselves, yet it is a problem that affects us all.

That might be the closest one comes to describing and understanding Trey Ciuri, the protagonist in John Peter Fer’s complex, far-reaching novel "A Fool and A...Read More