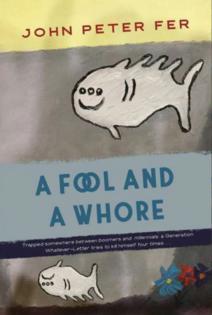 That might be the closest one comes to describing and understanding Trey Ciuri, the protagonist in John Peter Fer’s complex, far-reaching novel "A Fool and A Whore."

That description was from one of Trey’s many friends that Fer introduces using extended dialogue between characters rather than traditional literary narrative to help readers get their arms around Trey. Trey describes himself as a fool and a whore, which he translates as “a whole-life-is-f---d feeling.”

Throughout the book, we learn that Trey is constantly on the move – from stints in the Air Force (protecting nuclear missiles), the Peace Corps, as a fireman (following in his former-POW father’s footsteps), a teacher and Foreign Service. We learn a great deal about him and hear anecdote after anecdote about his escapades with his four close friends and other persons of interest. We also learn that Trey has attempted suicide several times – a topic that somehow eludes most of the storytelling until it doesn’t. But he somehow survives. “The only things that would stop me from descending into ‘the death spiral’ was if I had something to look forward to: a new job, a trip, a project, something.” Hence, he’s constantly on the go.

The author says Trey and his generation are trapped somewhere between Boomers and Millennials – a “Generation-Whatever Letter.” This gives him the opportunity to expound on wide-ranging topics: racial tension, religion, politics, war, culture, social class, relationships and much more – all through the lens of Trey in conversations with his core friends: Wade, an Air Force Academy partner in crime; his high school best friend Tony; Reggie, and Slim.

His relationships with women are significant: from his friend Linda, whose longing for Trey exceeds his, to his infatuation with Prudence, a year-older school friend with cystic fibrosis upon whom he has a crush. Interestingly, the one he eventually falls for and is engaged to, Millie, we learn very little about.

One also learns very little about Trey’s suicide attempts, and it’s more for the reader to piece together the telltale signs and insights that lead to them. Although Trey does offer, “When it hits, a darkness overcomes me … it changes life from an intriguing labyrinth with many paths into the linear desire to die. I am unable to please anyone, and I am disgusted to see myself.”

Ironically, Trey’s suicidal motivations for the most part are vague compared to those of Prudence, who knows her life will end at a young age and is tempted to end it herself until the goodness of Trey somehow talks her off the ledge.

"A Fool and a Whore" is not so much a story told through plot and events, but rather a character study that unfolds through its many conversations. The narrative moves as Trey moves, from place to place, job to job and friend to friend. Some of the stories revealed in the dialogue are funny and relatable – the kinds of tales many of us have experienced during a life of adolescence, discovery and maturity.

Yet through this dialogue, readers grasp the essence of Trey, his beliefs, his angst, his phobias, his beauty – and at the same time learn the author’s take on the world, on society and the machinations of one’s inner self.

John Peter Fer has created a unique and intriguing portrait of a decent young man with flaws that threaten his survival. It is an engaging whirlwind of personalities, ideas and beliefs, all the while watching young adults trying to figure things out on a larger scale.

His father recalls the time Trey got in a fight during a school basketball game. His opponent apparently grabbed the ball from Trey and knocked him down. Trey seemed to let this all happen, without any desire to get up and defend himself.

“You gotta fight, Trey,” his father says. “You can’t quit. You can’t give up.” Referencing his time in the Fire Department, dad recalls his captain saying, “If you quit on this, you will quit on a fire. And people will die.”

I have personally prepared, or helped prepare, more than 40 Thanksgiving turkeys over the years, several of which were entirely edible.

Drawing on my vast experience, and occasional use of fire extinguishers, I wish to ...Read More

Introduced on its title page as “An historical, fictional autobiography,” "Into the Sky With Diamonds: The Beatles and the Race to the Moon in the Psychedelic ’60s" by Ronald Grelsamer will be a wild ride of memories...Read More