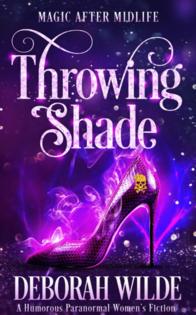 On the surface, Miriam Feldman, a 42-year-old divorcee with a teenage daughter and a job at a law library, has a normal life. If you don’t count her shadow-self, Delilah, who comes out to play every now and then. Miriam has managed to keep Delilah under wraps since the death of her parents 30 years ago, but when a seemingly harmless man she meets at a bar attacks her, Miriam is forced to unleash the power of her magic to survive. Turns out Alex is anything but harmless. He’s a host body possessed by evil, and warding him off is just the beginning of Miriam’s adventures.

When her best friend goes missing, Miriam pulls out all the stops to find her, even though Jude has lied to Miriam about her own otherworldly abilities. Throw in a walking, talking golem, a moody but hunky wolf shifter and some angry vampires, and you’re on one hell of a Wilde ride.

But Wilde doesn’t make you a stranger in her make-believe world. Like the talented and gracious hostess she is, she invites you in, sits you down, mixes you a martini, fills you with tasty snacks and invites you to stay awhile.

It’s not always easy to navigate a paranormal author’s fictitious world. I’ve given up on many a novel that makes me feel like I’m wandering through a dense jungle without a map. Instead of leaving you to your own devices, Wilde hands you a smartphone, complete with a GPS tracker and hiking app. She orients you in the story and steers you where you need to go to understand the players and the conflict. And she does it in a way that prompts laugh-out-loud moments of pure giddy satisfaction.

A MASTER OF THE CRAFT

I confess to always perusing an author’s website when I review a new book, but not only to get a list of other books they’ve written or see what other writing projects they’re engaged in. My first click is always to the About Me page on an author’s website. I wasn’t at all surprised to learn that Wilde is a former screenwriter. As a writer myself, I’m in awe (and more than a little envious) of her pacing and the way she writes dialogue, Miriam’s hysterical witty comebacks hitting home in the best possible way.

Some authors can overdo this by creating a sassy character that lacks depth, but Miriam Feldman is fierce — confident, loyal and unapologetically fabulous. But then, so is the shifter she enlists to help. Laurent challenges Miriam, the two characters sharing a chemistry that will leave your fingers itching to turn pages, hungry for their scenes together.

Will they find Jude? And what will happen when they do? Will Miriam shield her magic once again, or face the truth of who she is and be the person she was meant to be, all along? No spoilers here, but I can guarantee that you’ll be glad this one is part of a series.

I took this book with me on vacation and spent hours reading it by the pool, grinning into my ice-cold mojito and internally fist-bumping my fabulous new imaginary friend — Miriam. I could see her sitting on the deck chair next to me in a cherry-red bathing suit, dark shades covering her eyes, regaling me with witty anecdotes of life in a world where magic exists. And who doesn’t want to believe in magic? If only for a little while …

I have personally prepared, or helped prepare, more than 40 Thanksgiving turkeys over the years, several of which were entirely edible.

Drawing on my vast experience, and occasional use of fire extinguishers, I wish to ...Read More

Introduced on its title page as “An historical, fictional autobiography,” "Into the Sky With Diamonds: The Beatles and the Race to the Moon in the Psychedelic ’60s" by Ronald Grelsamer will be a wild ride of memories...Read More