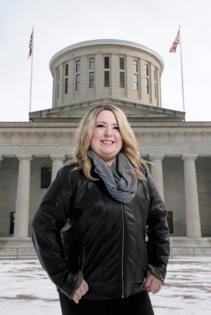 COLUMBUS, Ohio -- A Columbus-area advocate for changes to cancer treatment has died.

Geib was first diagnosed the week of her 30th birthday with stage 4 metastatic breast cancer, meaning the disease had spread to other organs, including her spine and brain.

Around 75% of people with metastatic breast cancer like Geib die in less than five years, Geib told The Dispatch in 2020. Geib didn't let that statistic or the diagnosis slow her down though.

Geib pushed for changes to state law that forced some cancer patients, including herself, to "fail first" on cheaper, less effective treatments. The requirement to "fail first" is something historically pushed by insurance companies to save money.

"My cancer could have been stabilized," Geib said in December. "Knowing that the science was there and everything was lined up except for the insurance ... it almost seems criminal to do that to people."

Despite the setback, Geib pushed the state legislature to ensure no one else would have to "fail first."

Geib was a patient at Ohio State University's James Cancer Hospital and credited doctors there with helping her to navigate her cancer diagnosis and treatment. Dr. Bhuvana Ramaswamy, who leads the breast medical oncology team at Ohio State called Geib "an inspiration" for those who were diagnosed with cancer.

On top of her work as an advocate for legislative changes, Geib started a website and blog called Metastatic Millennial, where she chronicled her fight against her cancer. She served as the honorary chair of the 2019 Komen Columbus' Race for the Cure.

Geib loved cooking and baking, previously worked as professional chef and competed in cooking activities at county and state fairs, according to her obituary. She was a graduate of both Mount Vernon Nazarene University and Columbus State Community College.

An estimated 168,000 Americans are currently living with metastatic breast cancer, for which there is no cure, according to the Metastatic Breast Cancer Network. Like Geib, around 43,600 women and 5,300 men die of the disease every year in the U.S.

"For people living with metastatic breast cancer, our diagnoses don't always fit the traditional breast cancer narrative. We are not counting down to the end of our treatments, waiting for the day when we will be cancer-free and can go on with our lives," Geib told Ohio State for a patient profile. "We won't be ringing a bell when we complete treatment."