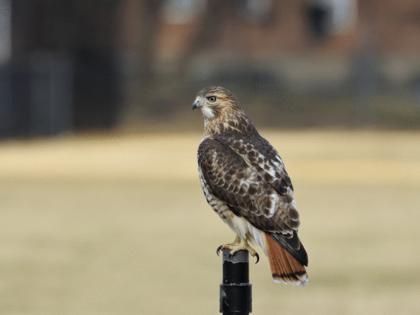 It's been a rough year for the garden. By mid-July the tally was 49-0 with rabbits, squirrels and raccoons for the win.

They grazed through petunias, lilies, sunflower starts, destroyed phlox and mowed an expanse of zinnias like a lawn tractor with zero-turn radius.

The main component of my flower garden was tufts of fur from rabbit tails. They're soft enough, but they just don't look all that great in a vase.

Many mornings I would stick my head out the back door and yell, "Would you like that steamed or oven roasted?"

This triggered laughter, followed by baby cucumbers thrown at my head.

They were hardcore. Ate everything straight up. Make that straight down — to the ground.

They grew increasingly brazen and danced conga lines across the patio with fresh parsley hanging from their mouths.

"You'll get yours one day," I shouted. I didn't know what "yours" was or when "one day" might come, but it felt good to heckle them as the gardening season inched away. Then the red-tailed hawk came.

It was lean and hungry and had a wicked glint in its eye.

We hustled small children inside with instructions to stay away from the windows.

A couple of weeks later, the hawk left.

Took that hawk six runs before it could get airborne.

The hawk left satisfied and so were we.

There was still a chunk of growing season remaining and leftover seeds in the garage. I planted zinnias and daisies, all of which sprouted and started to bloom. These encouraged battle-weary phlox and renegade larkspur to return on their own.

Then the ultimate challenge: I tucked a fresh round of cantaloupe and watermelon seeds into the ground thinking they might just mature before the first frost. There must have been 50 blooms on the cantaloupe vines and 20 on the watermelon. But no fruit.

Then one day I was giving a friend the Poor-Me Pity Tour of the garden and she spotted a cantaloupe hidden beneath a vine. It was a whopping 2 inches in diameter.

A few days later, I was checking on the cantaloupe and spotted a teeny, tiny icebox watermelon, deep green, perfectly formed that was the size of a penny.

Every day I checked one cantaloupe and the one watermelon. They were growing — slowly and ever so slightly, but maybe, just maybe.

Last week I checked the "crops" (I feel entitled to use the plural since there are two melons, not just one) and gasped at the watermelon.

A critter had eaten through the side.

Our last great hope is the cantaloupe. We will be up against first frost date, but if the temperature dips, I will tent it and sit beside it all night with a thermal blanket if necessary.

I envision a pageant of sorts when it is finally ripe, gardeners cheering, throwing peat moss in the air and waving trowels as it is transported to the house.

Then, for the grand finale, we will put it on a silver platter, and all scoop out a bite. With demitasse spoons.

It won't be much, but it will be one in the win column.

DETROIT -- Five years ago, Sierra Barber, was diagnosed with polycystic ovary syndrome, a hormonal imbalance that causes problems in the reproductive organs.

Her doctors, she said, told her that if she ever was able to ...Read More

“I’m furious with Mother. She stole my childhood … I feel pierced because she played on my fears. I trusted what she did was best for me, but she met her own needs, not mine. She took advantage of a scared, ...Read More

BEL-NOR, Mo. — Tekesha Calmese, fresh off a plane from her home state of Texas, wandered the Lake Charles Cemetery on a Saturday last month in search of the grave markers of her two children.

They were slain as adults ...Read More

At the end of fourth grade, Olivia Ohlson-Ellis’ mom, Virginia Ohlson, was diagnosed with breast cancer. It was caught early through a mammogram, and she had a double mastectomy and chemotherapy in summer 2017 to remove...Read More

In a candid essay, “The Hard Truth About My Surrogacy Journey” for Time magazine, taken ...Read More

I have received some splendid thinking-of-you gifts lately — and it's not my birthday or anything.

A paper bookmark sits on my desk with each letter of the word "Grandma" drawn in a different color. It is a large ...Read More