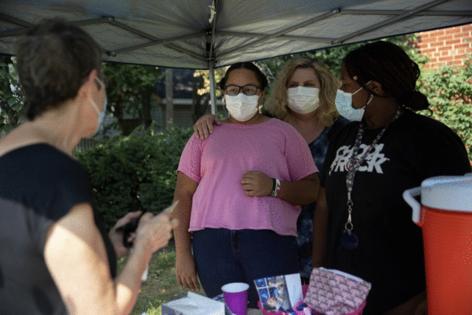 At the end of fourth grade, Olivia Ohlson-Ellis’ mom, Virginia Ohlson, was diagnosed with breast cancer. It was caught early through a mammogram, and she had a double mastectomy and chemotherapy in summer 2017 to remove the cancer that had spread to her lymph nodes.

It was that summer, at 10 years old, that Ohlson-Ellis took her aspirations to run a lemonade stand and made them a reality.

“She came to me with the idea of: ‘Could I do it and raise money for people at the cancer center?’” recalled her mother. “I was in the middle of chemo ... not feeling the best. It was something positive to focus on and a distraction for her because she’s going through this too. She was excited about something that she’d have control over, and have fun with.”

Since then, Ohlson-Ellis, now 14, has raised $9,600 of her $10,000 goal for NorthShore University HealthSystem’s Kellogg Cancer Center through her sale of lemonade and cookies at her stand in front of her Evanston, Illinois, home. The signature cookie: shortbread with pink icing and sprinkles.

Her work has caught the attention of television stations in the past, but most recently, her efforts inspired Austin-based singer/songwriter Jenn Hartmann Luck to write a song about her lemonade endeavor. Titled “Lemonade,” the song debuted Aug. 6 on streaming platforms, with 15% of each download going to NorthShore Kellogg Cancer Center. Some of the lyrics: “I stood up. I made lemonade out of the lemons they laid in front of me. I helped my family.”

“Some friends had them (lemonade stands). This was before the whole cancer center thing,” Ohlson-Ellis said. “I just wanted to stand out there and squeeze the lemons ... more of a fun summer activity. But then when my mom was diagnosed, it was more about helping other families.”

Helping is what Ohlson-Ellis does. During the pandemic, when the lemonade stand was put on hold, she tutored kids in math over Zoom. For families who couldn’t afford her services, she tutored for free. Those families who could afford her services, she asked them to donate to the cancer center. Ohlson-Ellis also started Hygiene Kits for Evanston’s Underserved — a GoFundMe that helps her buy items such as deodorant, toothpaste, razors, soaps, etc., which she puts into kits and passes out at food pantries and local places that give away clothing. The freshman at Evanston Township High School said she’s made 1,800 kits so far.

“We make sheets of the cookies and then divide them into serving sizes,” Ohlson-Ellis said. “We’re pretty close to $10,000; we’re trying to get it with this stand.”

“She’s very much a go-getter and has a lot of ideas,” said Ohlson. “She’s intending to be a three-sport athlete at Evanston Township; she’s on JV golf right now. She’s very artistic ... she teaches origami. And she writes for sports for the school newspaper. She just joined the Evanstonian staff, and she’s working on her first story.”

Next up, being featured in an upcoming book series by Minnesota-based author Stacy Bauer. The series showcases dozens of youths who are changing their communities in their own way. It’s called “Young Change Makers.”

“The media attention can be both fun and embarrassing, but the main point of it is to really bring attention to my causes, not me personally,” Ohlson-Ellis said. “But I hope it inspires other people to help those around them too.”

Brad Watkins, senior director of communications for NorthShore University HealthSystem Foundation, said it’s hard to keep up with Ohlson-Ellis’ outreach efforts. He said there’s been a renewed interest in her fundraising given the song’s release. Money raised from the single goes to the NorthShore Foundation’s patient support fund, which pays for things not necessarily covered by insurance, such as cold cap therapy for hair loss during cancer treatments, rent or car payments, depending on need. NorthShore sees about 4,800 unique patients per year (which does not include patients who aren’t on active treatment).

“I’m always amazed that there is this spirit of people giving back that’s passed down to their kids and parents are encouraging their kids to give back now, rather than waiting until they’re in their 20s or 30s,” Watkins said. “It’s such a great, simple idea (a lemonade stand). It really shows how when you care about something and you really want to help out with a cause, it’s those little things that grow so well and do a good job.”

“Olivia is a young person who’s like: I see a problem, I step up,” Hartmann Luck said. “She sees opportunity for her to make the world better, and leans in.”

The album is called “Raise Your Voices (Songs Celebrating the Kids Who Are Changing the World)” and every song on the record is inspired by young people.

“When COVID-19 hit, I knew I wanted to write a new album centered around young people,” Hartmann Luck said. “It was young people that were being so hopeful and positive, and inspiring me to tap into the light that just pours out of young people. ‘Lemonade’ is not a kids song. But because a child is at the center of that story, it becomes a piece that a young person can respond to — they can see themselves inside that song.”

Ohlson-Ellis was referred to Hartmann Luck by an Evanston friend. Every song on the album centers on one child’s mission and the spirit of giving back to organizations doing the work; the kids have chosen the nonprofits that will receive proceeds from album sales. (The album was set to launch Sept. 12, but has since moved to November, according to Hartmann Luck.)

Until then, Hartmann Luck’s record label will continue to release singles. Hartmann is planning to visit Chicago during October (Breast Cancer Awareness Month) to do a live, acoustic performance where she can meet Ohlson-Ellis in person for the first time. She wants people to come out and hear songs from the album and do a fundraiser for the cancer center.

“Someone like Olivia ... they’re going to teach us ways to navigate this new time that is us heading into the 2020s, how we’re going to hopefully do better,” Hartmann Luck said. “Whether it’s in their churches, in their neighborhood, or on a global scale, kiddos find a way to make things better, and to help those who could use a hand.”

In a candid essay, “The Hard Truth About My Surrogacy Journey” for Time magazine, taken ...Read More

I have received some splendid thinking-of-you gifts lately — and it's not my birthday or anything.

A paper bookmark sits on my desk with each letter of the word "Grandma" drawn in a different color. It is a large ...Read More

DALLAS -- When Tracy Matheson set up the soft interview room at the Mesquite, Texas, Police Department on Aug. 27, she wished she didn’t have to. The Fort Worth resident wishes the other 30 rooms she has created around ...Read More

Deneen Day would visit her mother from afar, but...Read More