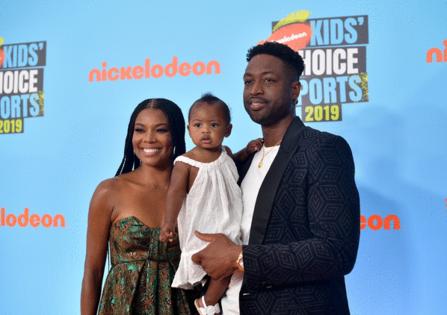 In a candid essay, “The Hard Truth About My Surrogacy Journey” for Time magazine, taken from her new book, “You Got Anything Stronger?” the actress takes us back to when it all began in 2016.

After having multiple miscarriages and being diagnosed with adenomyosis, an often painful condition when the lining of your uterus breaks through the muscle wall, the TV star’s doctor in Los Angeles broke the news that surrogacy was her most viable option.

“I wanted the experience of being pregnant,” she wrote. “To watch my body expand and shift to accommodate this miracle inside me.”

Union also admitted that she wanted to show off her bump.

“I also wanted the experience of being publicly pregnant,” she said. “I would shake off the distrust society has for women who, for whatever reason —by choice or by nature — do not have babies. I had paid the cost of that for years, and I wanted something for it.”

She recalls how supportive her famous husband was throughout the whole process. After the both decided on the baby’s name, the Miami Heat star announced that he wanted to tattoo Kaavia on one shoulder and James on the other.

“I was terrified of the permanency,” Union wrote of his plan for the ink. “As he sat before me with his shirt off, I placed my hands where her name would be, and kissed the top of his head. I thought of something he would sometimes say to himself and to others: ‘My belief is stronger than your doubt.’”

Even after Kaavia James Wade was born via the power couple’s surrogate named Natalie (no last name given) in 2018, Union’s twinges of regret and pain still linger.

“Relief, anxiety, terror, joy, resentment, disbelief, gratitude … and also, disconnection,” said Union. “I had hoped that the second I saw her, there would be a moment of locking in.”

Now that the child they affectionately call The Shady Baby is almost 3, Union shares that she still has her doubts, because she did not grow the baby in her own womb.

“[The] question lingers in my mind: I will always wonder if Kaav would love me more if I had carried her. Would our bond be even tighter? I will never know what it would have been like to carry this rock star inside me. When they say having a child is like having your heart outside y our body, that’s all I know. We met as strangers, the sound of my voice and my heartbeat foreign to her. It’s a pain that has dimmed but remains present in my fears that I was not, and never will be, enough.”

I just learned a new way to tell if you are "officially old."

This tidbit comes courtesy of an 11-year-old granddaughter. She has no research to back this up, not a single poll nor shred of scientific evidence. That said,...Read More

They are less likely to see the doctor. They eat fewer fruits and vegetables. They're more likely to smoke, die in alcohol-related crashes, and engage in other activities that can lead to traumatic brain injury. By nearly ...Read More