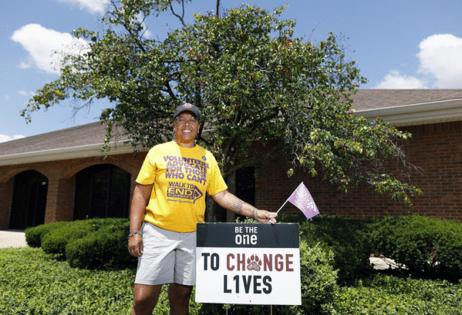 Deneen Day would visit her mother from afar, but Tillie couldn't connect the voice on the phone with her daughter's face at the window. Deneen tried FaceTiming her mother, but Tillie would cry because she didn't understand why Deneen was trapped inside the little rectangular box.

"I never wanted to cry in front of my mom, so I would just leave before I started crying," Deneen Day said.

Tillie had late-stage Alzheimer's disease. For Deneen, that often meant she was "grieving in place." Every time the disease took another part of her mother, Day had to grieve the loss.

The 58-year-old East Side resident filled the void in the way she knew best: by helping other people affected by Alzheimer's. Day said volunteering at the Alzheimer's Association was a "healthy distraction" when she couldn't visit her mom.

Day has worked with the Alzheimer's Association for about 10 years, after bringing her mother to some of its programs. Day facilitates support groups for caregivers of Alzheimer's patients and teaches community education programs about Alzheimer's.

"For me, it's to put a face and a feeling and a family to the disease," Day said.

Elizabeth Murphy, who takes care of her mother who has Alzheimer's, said Day helps normalize the emotions people feel when a loved one has dementia. Murphy organizes a group for older adults at the United Methodist Church, and Day has spoken at the group on behalf of the Alzheimer's Association several times.

"Who wants to hear about dementia?" Murphy said. "But she makes it OK to talk about, and she lessens that anxiety and stress about talking about such a difficult subject. People love her."

Melissa Rouse, a nurse and program manager at the Alzheimer's Association, said Day has participated in almost everything the group has going on.

"Everybody in the Association has always said you can rely on Deneen," Rouse said. "Instead of being a volunteer, she could easily be mistaken for an employee - she just knows that much about the Association."

Day doesn't stop with the Alzheimer's Association; she also volunteers in the neonatal intensive care unit at Nationwide Children's Hospital, mentors students through the BE THE ONE program in Columbus City Schools, escorts World War II and Vietnam veterans on Honor Flights , and delivers meals to seniors through Meals-on-Wheels. Day also volunteers at the Franklin County Dog Shelter.

Recently, Day earned her end-of-life doula certification, allowing her to start professionally caring for terminally ill peoples' physical, emotional and spiritual needs. While Day seems to spend every minute of her day volunteering, she said she feels blessed to volunteer and looks forward to her work.

"I don't feel overextended, because I always walk away filled," Day said.

Day's friend and founder of the BE THE ONE program, Dawn Heideman, said Day is always filling in the gaps. Whether it's speaking up for a student who isn't sure they'll graduate, serving lunch at her son's school cafeteria, or inviting a child in foster care to Thanksgiving dinner, Heideman said Day's largest contribution to the community is being there for others when no one else is.

Tillie Day died on July 8, 2020, at age 82. A year after her mother's passing, Day is still volunteering with the Association.

"Right now I have every reason to be mad about how my mom died and where she died. But, you know, I think I did good by her," Day said. "I think she's very proud of me for volunteering. I came out of it OK, so I want to help others come out of it OK."